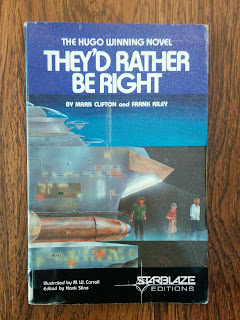 It has an interesting plot concept, some moments of good prose, and presents some unique ideas, but I found it very uneven and hard to get through in places, and left me feeling unsatisfied when I finished it.

By the standards of the science dime fiction pulp magazines of the 1950s it would have made an interesting story, but it pales in comparison to later novels by the top of the field like Asimov, Clarke, and Heinlein.
Posted by Jeff Tranter at 11:00 AM