Hugo Winner Book Review: The Gods Themselves by Isaac Asimov 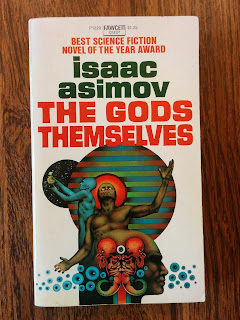 I had read it before, but it is one of Asimov's best novels and as it had been some years since reading it, I decided to read it again.

I remember reading in Asimov's autobiography that the genesis of this novel was a criticism that his stories didn't feature non-human aliens or sex, so he was determined to write a novel with very alien aliens and (alien) sex.

The novel is in three distinct parts: the first takes place on Earth, the second in a different (parallel) universe, and the third takes place on a future colonized moon.

It is a standalone novel that doesn't fit into his robot or Foundation series, and in my opinion was Asimov in his prime. There were some similarities in his depiction of lunar colonies with books by Robert A. Heinlein, but I think this just reflected the general thinking of most science fiction authors of that era about where future colonization of the moon could go.

He also put in some political intrigue among scientists, vying for fame and backstabbing each other, that is likely based on some of his experiences as a scientist and academic.
Posted by Jeff Tranter at 8:28 PM No comments: 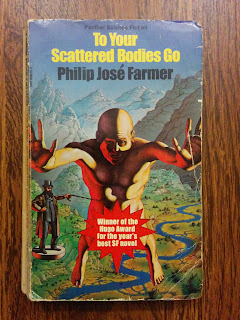 Another thoroughly enjoyable novel, this won the 1972 Hugo award for best novel.

It was an easy read that I completed in just a few sittings. The style reminds me somewhat of older authors like Jules Verne and H. G. Wells, perhaps because the hero was a man from the late 19th century. In fact the main character is a man of so many abilities, like speaking dozens of languages, that I would have said it was a flaw in the book that made him unbelievable if it were not for the fact that Richard Francis Burton was an actual historical character.

The book has a novel premise, interesting characters, gripping plot, and ended up becoming a series of five novels and several short stories.

Posted by Jeff Tranter at 9:43 PM No comments: 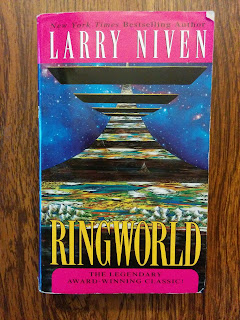 This was the Hugo award winner for best novel in 1971.

Considered a classic, the Ringworld is a mysterious alien megastructure millions of miles in size. This first novel spawned a number of sequels and prequels.

I thoroughly enjoyed this novel, particularly the concept of the Ringworld, but also the plot and characters.

The first edition had a number of technical errors in it, most notably the idea of travelling eastward around the Earth in order to extend the date of a  birthday, when in fact one would need to travel west to do this. Regarding this, Niven wrote, "If you own a first paperback edition of Ringworld, it's the one with the mistakes in it. It's worth money." Sure enough, my copy (pictured above) is indeed a first edition paperback.
Posted by Jeff Tranter at 8:32 PM No comments: 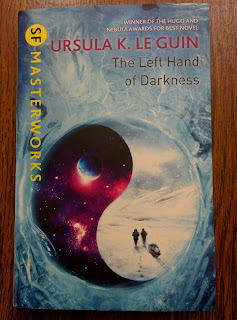 This was the winner of the Hugo Award for best novel of 1970, and the first Hugo won by a woman author. I thoroughly enjoyed this novel - it is highly imaginative and original with a gripping plot and well-developed characters. The author describes an entire planet in great detail, with a detailed culture and even describing their calendar and time system. The people of the novel are androgynous, and it raises many interesting questions about the concept of gender, something that is very timely today.

This was the first Le Guin novel I recall reading, and I look forward to reading her 1975 Hugo winning novel in the future.

Posted by Jeff Tranter at 8:33 PM No comments: