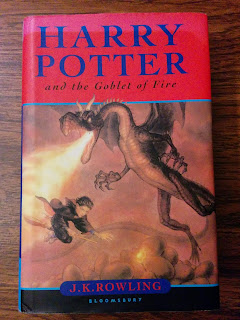 Not many pure fantasy novels have won the Hugo award for best novel. One notable winner was The Sword in the Stone in 1939. This book, the fourth in the Harry Potter Series, won the award in 2001. This was the only one of the seven Harry Potter books to win a Hugo.

I was vaguely familiar with the Harry Potter franchise but had never read any of the novels or seen the films. I would say that the book lived up to my expectations and I can see why they were so popular with young people. Highly imaginative, well plotted, and with well developed characters, the books never talk down to the reader. At 636 pages in the hardcover edition, this book was over twice as long as the earlier novels (but exceeded by the subsequent book).

Given the popularity of the series, it is fitting that it won at least one Hugo award.
Posted by Jeff Tranter at 12:43 PM No comments: 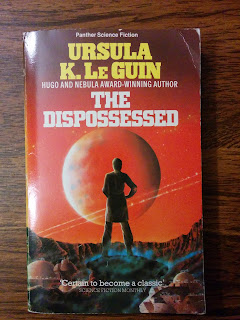 Winner of the 1975 Hugo for best novel, this is a fascinating story about an unlikely hero and two planets with widely differing political systems. It fits into Le Guin's Hainish Cycle, like "The Left Hand of Darkness" a Hugo winner I previously reviewed.

Highly original and imaginative, It describes an anarchist utopian society that almost had me convinced that it could work.

Recommended reading, it is a standalone novel that doesn't require having ready any of the other novels in the series.
Posted by Jeff Tranter at 6:05 PM No comments: