Rebuilding The Heathit AT-1 Transmitter - Planning

To plan the AT-1 restoration, I collected information I could on the unit including a partial manual and some other articles published in the past on the radio and modifications for it. 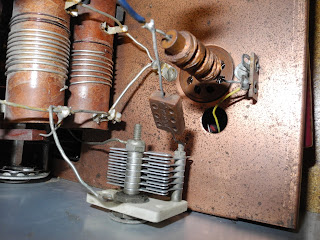 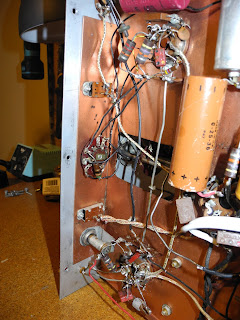 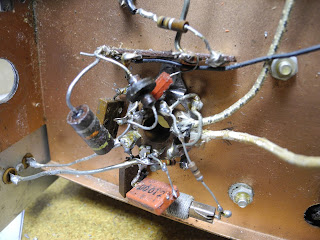 I took many high resolution digital camera pictures from as many angles as possible to assist when I reassemble it. 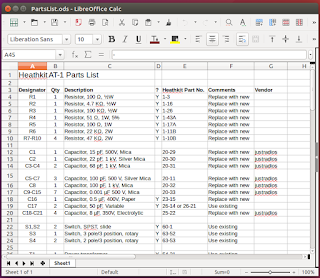 I also made a spreadsheet of the parts list (bill of materials), based on the BOM in the manual, annotated with component designations (the original manual did not use any) and notes on whether to reuse the existing part or purchase new one, and the vendor to get the parts from, where applicable. 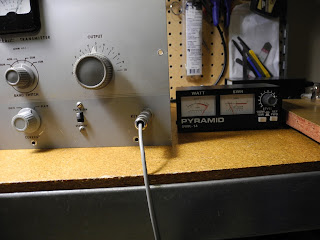 I took key voltage measurements as well as measuringe the RF power output, for later comparison when it is rebuilt. I get about 10 Watts of power on the lower bands, and 4 Watts on 10 meters. 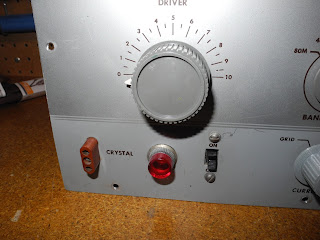 I think I will keep the mod for the pilot lamp since there is a large hole in the chassis and front panel drilled for it and it isuseful to be able to see when it is powered on.
Posted by Jeff Tranter at 12:36 PM No comments:

Rebuilding The Heathit AT-1 Transmitter - Overview 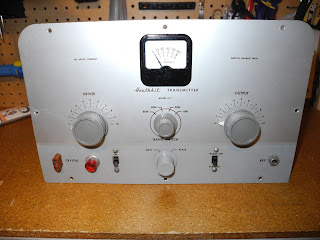 I decided to start a restoration project on this Heathkit AT-1 transmitter. This was Heathkit's first amateur radio kit, and was quite successful, with many built and used in the late 1950s and 60s and even today for fun and nostalgia reasons.

I bought this unit at a hamfest a few years ago and did some restoration to get it working, including painting the case. I made a YouTube video that describes it in detail. 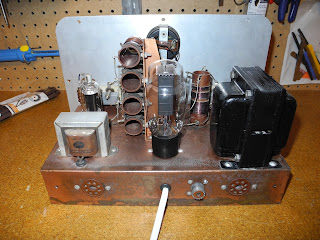 Now I would like to more completely restore it. The copper plated chassis is badly corroded and the construction quality is poor. Many of these units were built by beginners, often young people with limited experience in electronics. No doubt many repairs and mods were also done to this unit in the over 50 years since it was first built. This one has had a modification done to replace the final tube with a 6E26 to get more output - it was described in an article in Popular Electronics magazine in 1958, as well as a few other mods. 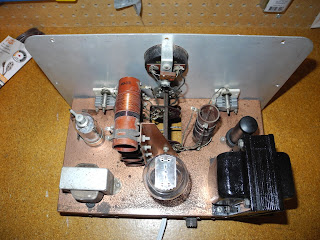 My plan is to totally strip it down to the bare chassis, removing all components. Then I will rebuild it from scratch using some of the existing parts and new ones, where possible. I will also undo the mods and revert it back to the original circuit. 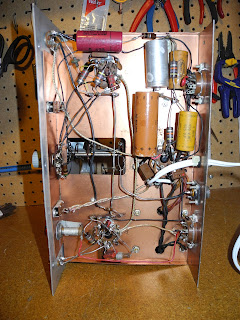 Not all parts will be original, so it won't be "museum quality". It is a tradeoff between keeping the original circuit but using new parts so it works as well or better than new. If I was planning to use on a regular basis, I would make some additional changes to make it a little safer: at minimum a grounded cord, fuse, and some safety caps.

A total rebuilt like this is sometimes done for collectable radios. The AT-1 is somewhat collectable, but not particularly valuable. I have always wanted to do a complete rebuild of a Heathkit, and this will be a lot less effort than for a more complex transceiver like a Heathkit HW-101, for example.

Part of the fun will be the opportunity to build a Heathkit from scratch by following the steps in the manual.
Posted by Jeff Tranter at 10:31 AM No comments: