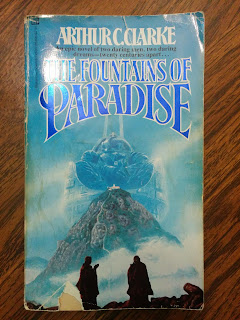 I started this journey of reading Hugo award winning novels with books that were written well before I was born. Over 30 novels in, I'm now up to the Hugo award for best novel in 1980, the year that I got married.

Isaac Asimov is my favorite science fiction writer, but when Arthur C. Clarke was writing at his best, I think he was a better writer. This novel is Clarke at the top of his form. Based on the idea of a "space elevator" (one which is theoretically possible and likely to happen some day) it has all the hallmarks of his writing including an exciting and imaginative story with many excellent little details. The characters are also a little more developed than in most of his stories.

A hallmark of his writing seems to be contact with extraterrestrials, often highly advanced. This was not part of this story but he adds a subplot plot on this topic that gets weaved into the main story.

Posted by Jeff Tranter at 12:34 PM No comments: 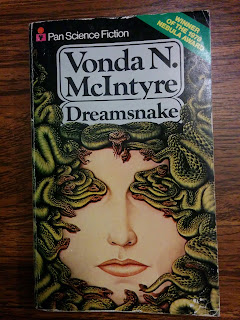 Winner of the Hugo award for besr novel of 1979, this is a touching and beautiful story with an original and imaginative plot, well developed characters, and a fascinating science fiction setting. It is science fiction at its best, where the plot and characters are primary. Earlier dominated by men, by 1979 the Hugo awards were being won about half the time by women, and in recent years women have almost entirely dominated the best novel awards. This is highly recommended ready for anyone, whether science fiction fans or not.

Posted by Jeff Tranter at 6:03 PM No comments: 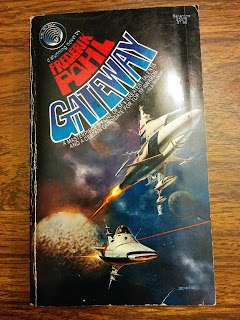 This novel won the Hugo award for best novel of 1978.

I enjoyed it, finding it an eclectic mix of science fiction themes with interesting characters and a very imaginative premise. It later became part of a series of novels and stories around a similar theme: the mysterious alien Heechee race.

The novel makes use of an interesting device in that many pages contain standalone text for signs, legal documents, classified ads, and even some kind of BASIC-like computer programming.

Pohl was a life-long friend of Isaac Asimov, and even acted as his literary agent for a period of time. The book has some references to a "Dr Asmenion" who was an expert on explaining science and astronomy and likes to tell off-colour jokes and was apparently from somewhere near Smolensk, Russia. This is clearly a little jab at Asimov. Another letter is written by a "Harry Hellison" that sounds suspiciously like science fiction writer Larry Ellison.

Pohl had a long career as a science fiction writer and editor, active right up to the time of his death in 2013 at age 93, but this was his only Hugo award winning novel (he did won some more Hugos in other categories).
Posted by Jeff Tranter at 8:40 PM No comments: 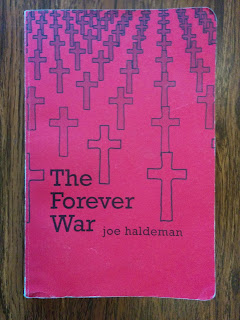 This won the Hugo for best Science Fiction novel in 1976.

It is about a long running war that is far away, fought by conscripted soldiers who don't want to be there, and ultimately turns out to be pointless and unnecessary. While definitely science fiction, it has many parallels with the Vietnam war that the author served in.

Not a humorous or particularly pleasant novel, it is highly imaginative and makes one think about war and even the future of mankind. The Earth depicted in the early 21st century has many disturbing parallels to the world of today and where it might be headed.

In summary, a fascinating read that was well deserving of the Hugo, particularly as the author went through 18 publishers before he found one willing to publish it.
Posted by Jeff Tranter at 12:10 PM No comments: 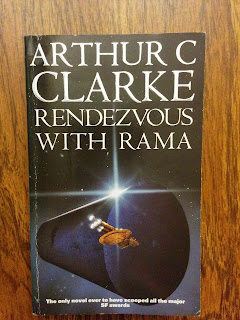 This was the Hugo award winner for best novel of 1974. It also won the other major science fiction award, the Nebula.

This is one of Clarke's best novels in my opinion, and has all the hallmarks of his work: incredible imagination, a sense of wonder, and a theme found in almost every one of his novels: contact with intelligent aliens. It also has what some find annoying: he doesn't explain everything, leaving many questions unanswered and up to the reader to ponder.

The novel spawned three sequels, which were written by author Gentry Lee (with some input from Clarke).
Posted by Jeff Tranter at 1:30 PM No comments: