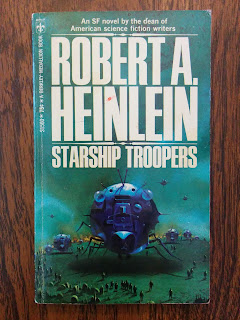 Another Hugo award winner by Robert A. Heinlein, this was best novel for 1960. I had read it before, but read it again for this Hugo award reading spree.

This is Heinlein's best known novel, and was made into a Hollywood film in 1997.

Less so than some of his early novels, like Beyond This Horizon but more so than his juveniles like Double Star, the book promotes Heinlein's political views and beliefs about the military. The Wikipedia article has good coverage of the novel and some of its more controversial elements.

While I strongly disagree with many of his political beliefs, it is a well-written gripping story. Good science fiction is often controversial and encourages the reader to think, and Heinlein certainly was one to encourage people to think.
Posted by Jeff Tranter at 1:40 PM