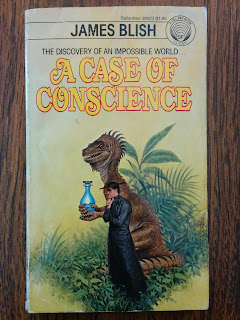 This was the Hugo award winner for best novel of 1959.

I was familiar with Blish through his novelisations of Star Trek episodes, but hadn't read any of his own original writing.

This is an interesting novel where the main character is a Jesuit priest who is one of a group to visit a planet with intelligent alien life. The aliens and their society raise religious, moral, and philosophical questions that the character struggles with. It also depicts an interesting vision of a post cold war 21st century Earth.

I found the latter half of the novel less interesting than the first, and the ending not particularly satisfying, but enjoyed it overall.
Posted by Jeff Tranter at 1:40 PM