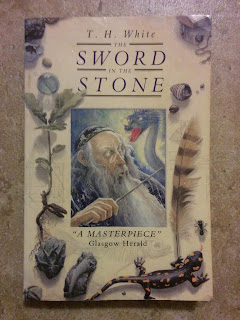 [Note: In this and subsequent reviews I will attempt to avoid any major spoilers, but read it at your own risk if you are planning to read any of these books.]

This is the book that was awarded the oldest retro Hugo award to date, and was my starting point for my goal of reading all the Hugo award-winning novels.

Must Hugos are science fiction, but this one is pure fantasy. I'm not a huge fan of the genre (I have enjoyed some though, like the Tolkien books), but I expect as part of my journey I may read some novels that are not to my liking. In fact it was a very enjoyable book and was quite an easy read.

The book tells the story of "Wart", the foster son of Sir Ector, a nobleman who rules a part of England in the middle ages. After their tutor leaves, Wart and Sir Ector's son Kay acquire a new tutor by the name of Merlin (spelled "Merlyn" in the novel). They have many adventures, eventually culminating in the major event that is referenced in the title of the book.

Published in 1939, it combines drama, history, events from the Arthurian legend, and comedy. There are some references to contemporary life (at least of the 1930s). The book eventually became the first of a four part series of novels.

If the name sounds familiar to you, its may be because if formed the basis of a 1963 Walt Disney animated film of the same name. The film follows roughly the same plot as the novel, with some notable differences. Reading the book, it is easy to see how it lent itself to an animated film, due to the use of magic and other elements that would be hard to portray in a live action film (before the days of CGI).

The book contains some very poetic passages, and what to me appear to be quite accurate descriptions of castles and other aspects of life at that time.

I initially wasn't sure it the book was aimed adults or young adults. I would say it appeals equally to both. Many of the terms and words are obscure, but not necessary to follow the plot, and are easy enough to look up today.

I would rate this book as a forgotten classic which is not generally well-known today but should appeal to any reader of, say, the Harry Potter books or the writings of Tolkien who is looking for something new to read.

Very few fantasy novels won the Hugo award, possibly no others until 2001 Harry Potter and the Goblet of Fire.
Posted by Jeff Tranter at 9:05 PM