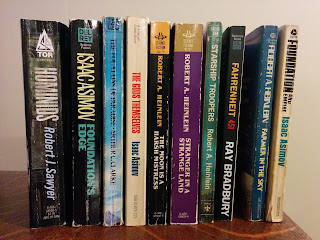 The Hugo Awards are a set of literary awards given annually for the best science fiction and fantasy writing. The awards are named after Hugo Gernsback, the founder of the science fiction magazine Amazing Stories. They been awarded annually since 1953.

Prizes are awarded in a number of categories, including best novel.

The Retrospective Hugo Awards, or Retro Hugos, were added in the mid-1990s and are awarded for works published prior to the start of the annual awards.

To date, 70 Hugos have been awarded for best novel, including six retro Hugos.

I have been wanting to expand my reading of science fiction to include more authors, particularly some more modern novels. The idea occurred to me to set as a goal to read all of the Hugo award winning novels, starting with the first Retro Hugo in 1939, up to the current (2018) winner. I'm going to make an attempt at this, starting with the earliest novels and moving to more recent ones. Ideally, I will reread some novels that I have already read, if it has been some years since I did so.

This may take some time - possibly years - and the list of winning novels will continue to grow as a new one is awarded each year (there will likely be some more retro Hugos awarded as well).

I plan to write a short review of each novel here on this blog.

I now have on order several of the early novels, and a few of them I already own, so I hope to start the first reviews within the next few weeks. I hope some of you will follow my progress, and maybe add your comments if you have read the same novels.
Posted by Jeff Tranter at 9:51 AM