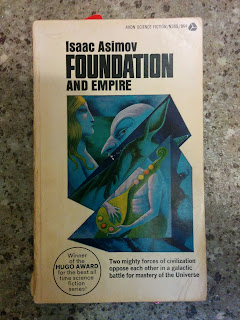 The 1946 Retro Hugo Award for best novel was awarded to The Mule by Issac Asimov. Awarded in 1996, 50 years after its original publication, the name may not be familiar to Asimov fans as a novel. It is better known for being published as part of the Foundation Series, specifically the second half of the novel Foundation and Empire, the second novel of the Foundation trilogy. Originally it was published as a standalone novella.

The Foundation trilogy (which Asimov later extended into more novels) is perhaps his most famous series of novels, telling an ambitious story of the decline and fall of the galactic empire.

Despite its popularity, some readers find the series heavy in dialog and lacking in action. If you are new to Asimov, I would refer you to first read his short stories and some of his standalone novels before tackling his Foundation series. Then, you will want to start by reading the first novel in the series.

I have read the series several time over the course of many decades of being a science fiction fan. I re-read The Mule as part of my goal of reading all the Hugo award winners. At first I wasn't sure I would re-read it, but before long I was hooked and had to finish it. If found it and easy and enjoyable read.

In 1983, Asimov again won a Hugo when he continued the series with Foundation's Edge, and it was not the last in the series to be written. We'll get to that novel eventually, but not until I read about 30 more Hugo winners first.
Posted by Jeff Tranter at 7:47 PM