Hugo Winner Book Review: Beyond This Horizon by Robert A. Heinlein 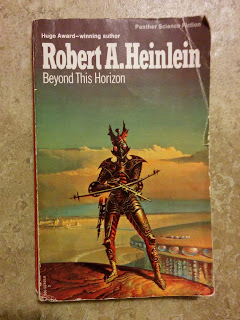 Beyond This Horizon, by Robert A. Heinlein, was originally published in Astounding Science Fiction in 1942 and as a novel in 1948. It was awarded a Retro Hugo award for best novel for 1943 in 2018 (on its 75th anniversary).

It is an interesting novel, describing a world about three hundred years in the future.

He predicts a number of things which have come true today, including the water bed, telephones with speech recognition and alarms, use of the metric system, test tube babies, and the technology to analyze DNA.

The novel also promotes many of Heinlein's personal beliefs about society (such as carrying of weapons), marriage, and his then-current interests the Social Credit system of economics, and the General Semantics of Alfred Korzybski.

It even explores the ideas of telepathy and whether there could be some form of existence before and after death.

While I generally consider Heinlein's short stories to be among my favourite science fiction, many of his novels tend to be preachy and transparent vehicles for his personal beliefs. He makes use of some poor plot devices in order to lecture about his ideas.

This was most apparent in his first (unpublished during his lifetime) novel, For Us, The Living: A Comedy of Customs. In Beyond This Horizon is only slightly more subtle.

While the story has many interesting ideas (especially for 1942), I didn't really buy into the plot, or even feel there was one. Later novels, like Stranger in a Strange Land (another Hugo winner, from 1962) showed a lot more maturity. Unfortunately, I found some of his last works, like To Sail Beyond the Sunset, almost unreadable.

Essentially his first novel (though published in book form after Rocket Ship Galileo), I would consider it a good start by a new writer who improved over time, and superior to most novels of the era.
Posted by Jeff Tranter at 9:02 PM