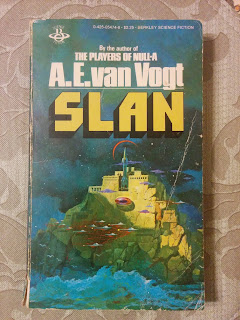 It is a science fiction story, pretty typical of the genre of the time, but with a very original plot. I think it holds up quite well today, other than some scientific explanations of atomic power.

The language used and lack of historical references means that the novel is not too dated and feels quite modern.

The abilities of the protagonist (which could be described as a type of superman) were perhaps a little over the top, reminding me in some ways of the Lensmen in E. E. Smith's Skylark series.

Generally considered to be A. E. van Vogt's best novel, I would highly recommend it as an easy and enjoyable read for science fiction fans.

As a final piece of trivia, A. E. van Vogt was born in Winnipeg, Canada, and was living and working in Ottawa when he wrote this novel. He subsequently moved to Los Angeles when his writing career took off, and remained there for the rest of his life.