Building a 68000 Single Board Computer - The TS2 Monitor 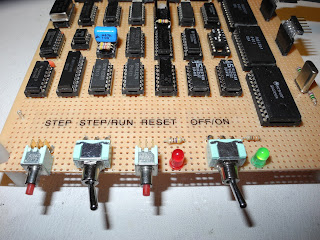 The original Teesside TS2 computer included a small machine language monitor program called TS2MON or TSBUG. There is a source listing for it in the book as well as on the included CD-ROM.

As I posted here earlier, I ported the monitor so it could be cross-compiled with the GNU assembler for the 68000. I now have it running on my prototype board. It is a very rudimentary monitor program, running out of ROM, and is a little over 3 Kilobytes in size.

I programmed it into two 27C64 64KB EPROMs. I've also verified that the board works with 28C64 EEPROMs.


I've documented the commands here. Here are a few examples.

Display and change some memory:

Change a couple of registers:

Dump a range of memory to an S record file:

The code was designed to be simple and readable. Despite its simplicity, it does have some more advanced features. It uses device control blocks (DCBs) in RAM to allow modifying the device input/output routines to redirect them. It can also be extended by code in the second set of ROMs to add more commands. 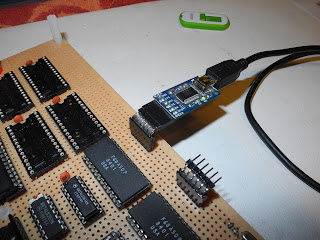 I've now wired up the second 6850 UART chip. The board has two serial ports. The rationale at the time was that users would typically have a dumb serial terminal connected to one port to use as a console, and the other port would connect to a development system computer for uploading or downloading programs. The TSMON LOAD and DUMP commands use the second serial port for this reason. 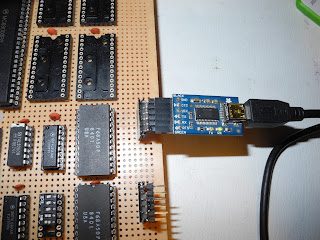 One of the simplifications in my design is to use an FTDI USB to serial (TTL-level) converter for the serial ports, avoiding the need for some additional chips and +/- 12 volt power supplies, and allowing it to be connected to a USB port. You can also power the board from USB if desired.

Typical usage today would be to connect to one computer using a terminal emulator (I'm using a laptop running Ubuntu Linux and use the minicom program). In that case it is probably more convenient to use only one serial port both as a console and for file transfers. While the monitor source code could be modified to use the monitor serial port for LOAD and DUMP, you can patch the DCB in RAM to direct the commands to use the console port rather than the auxiliary port. It is simply a matter of changing two words in the DCB. Addresses $00000D0E and $00000D26 need to be changed from $0041 to $0040. This needs to be done each time monitor is entered, i.e. after a reset.

Having done that, I can upload an S record file from my Linux laptop to the TS2 by cating the file to /dev/ttyUSB0 after running a monitor LOAD command. You can then run the program from the monitor. A simple test program can be found in git here.

In a future blog post I'll cover a more sophisticated monitor program, the TUTOR software, which was developed by Motorola for the 68000 Educational Computer Board (ECB), but also runs on the TS2 since it was designed to have a memory map compatible with the ECB.