My latest radio restoration project is a Heathkit GR-64 Shortwave Receiver. This was a low-end receiver made from 1964 to 1971 and originally selling for $39.95. It covers AM and shortwave in four bands and utilizes four tubes. 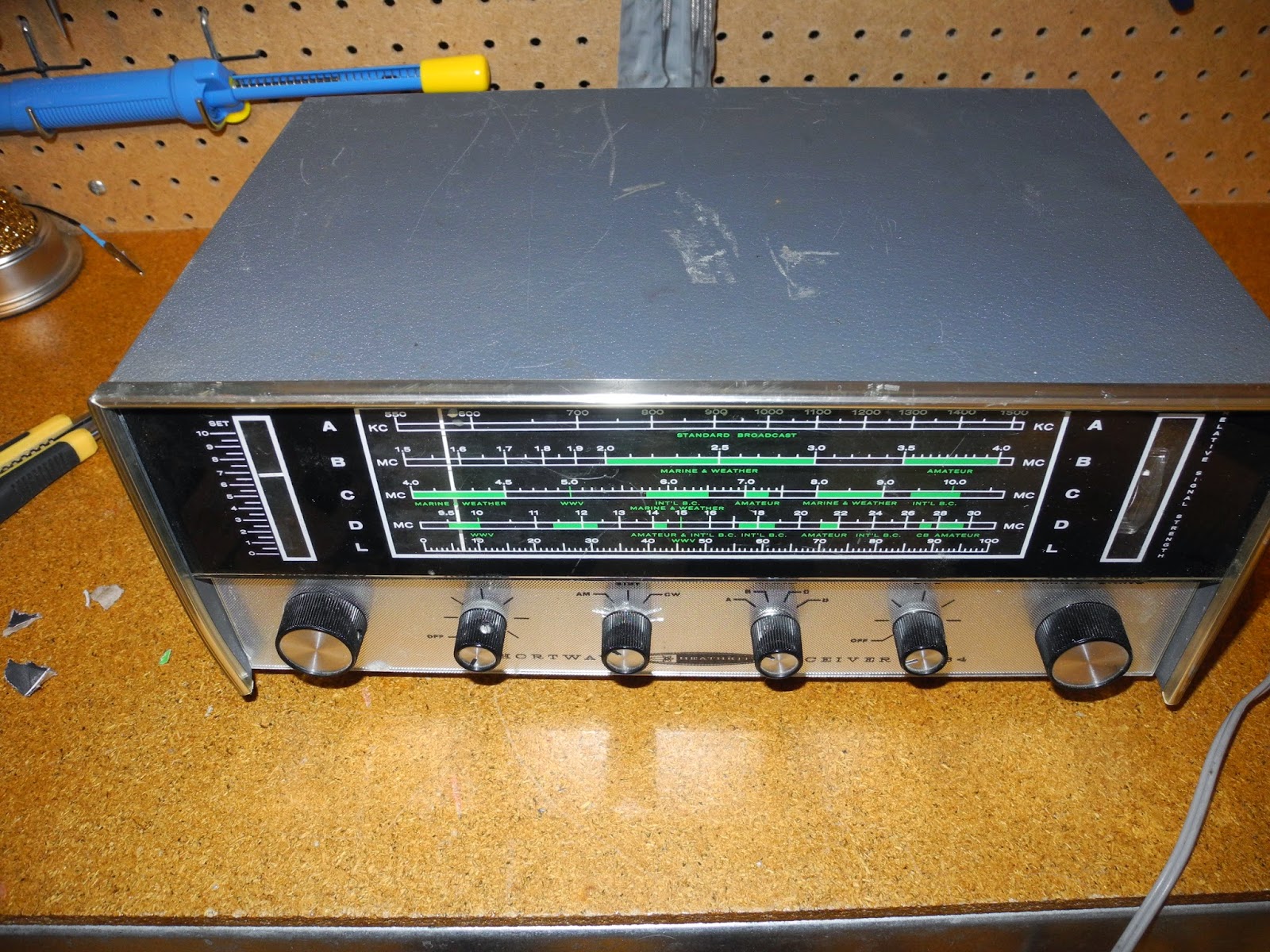 This one was acquired on eBay. Other than the usual scratches and small cracks around the plastic front panel, it looked to be in pretty good shape. It had suffered a bit in shipping with some tubes and the power transformer coming loose, but there did not seem to be any damage. It appeared to be complete, and when powered up it picked up several AM stations.

The shortwave bands didn't seem to be working well, if at all, and the S-meter was always off scale.

A check of the components showed that most resistors had drifted up in value, as is normal for the old carbon composition type. I replaced a few were 20% off or more. I figured that was the likely case of the S-meter problems, as it uses some resistors as a voltage divider to compare the AVC voltage to a reference value. 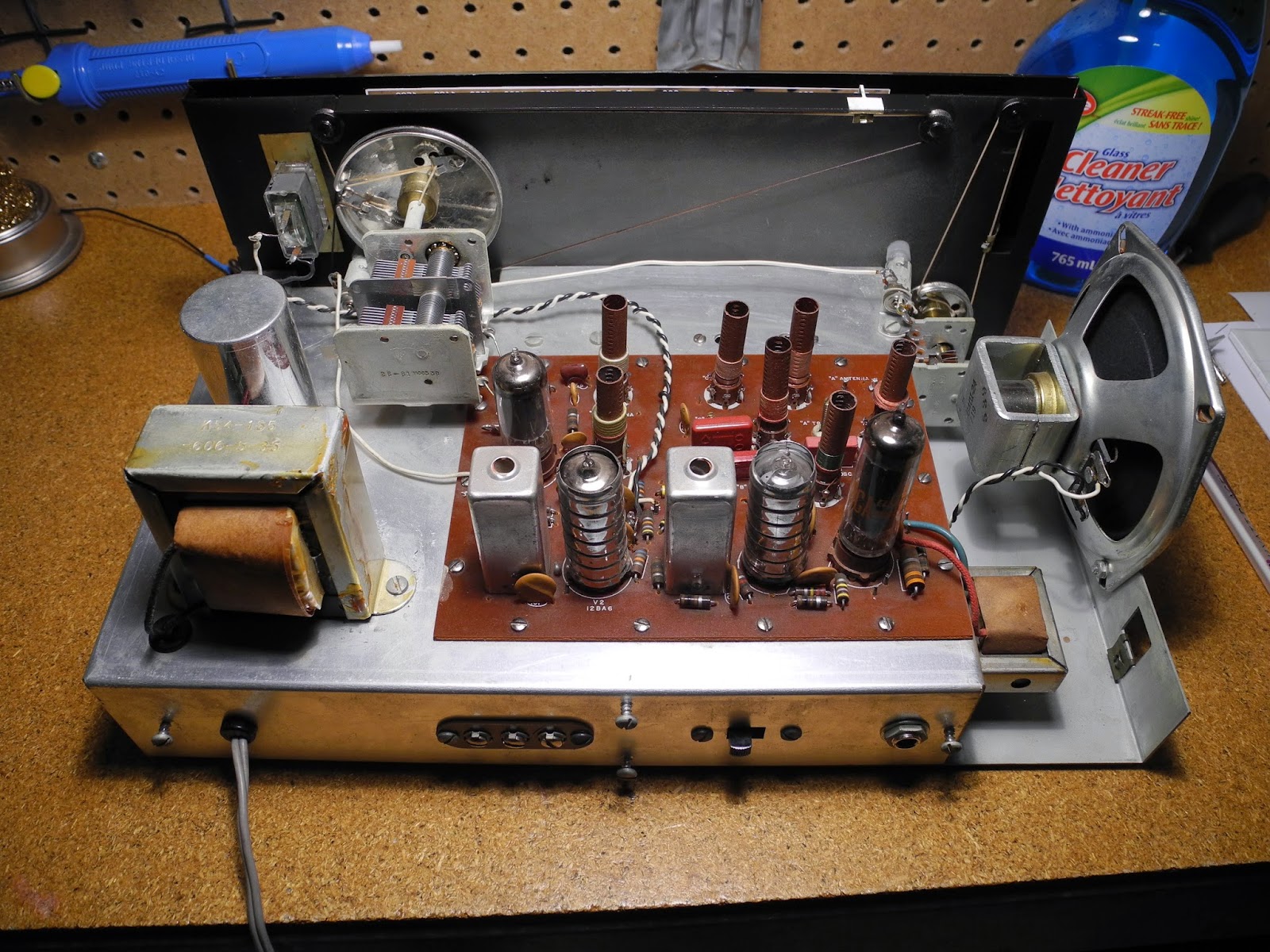 However, that did not fix the problem. I spent considerable time poking around, checking components and wiring. I tried swapping some of the tubes with known good ones from a Heathkit AR-3.

After lifting several resistors in the AVC circuit, there was still a resistance of about 60K to ground that should not be there and I could not account for. 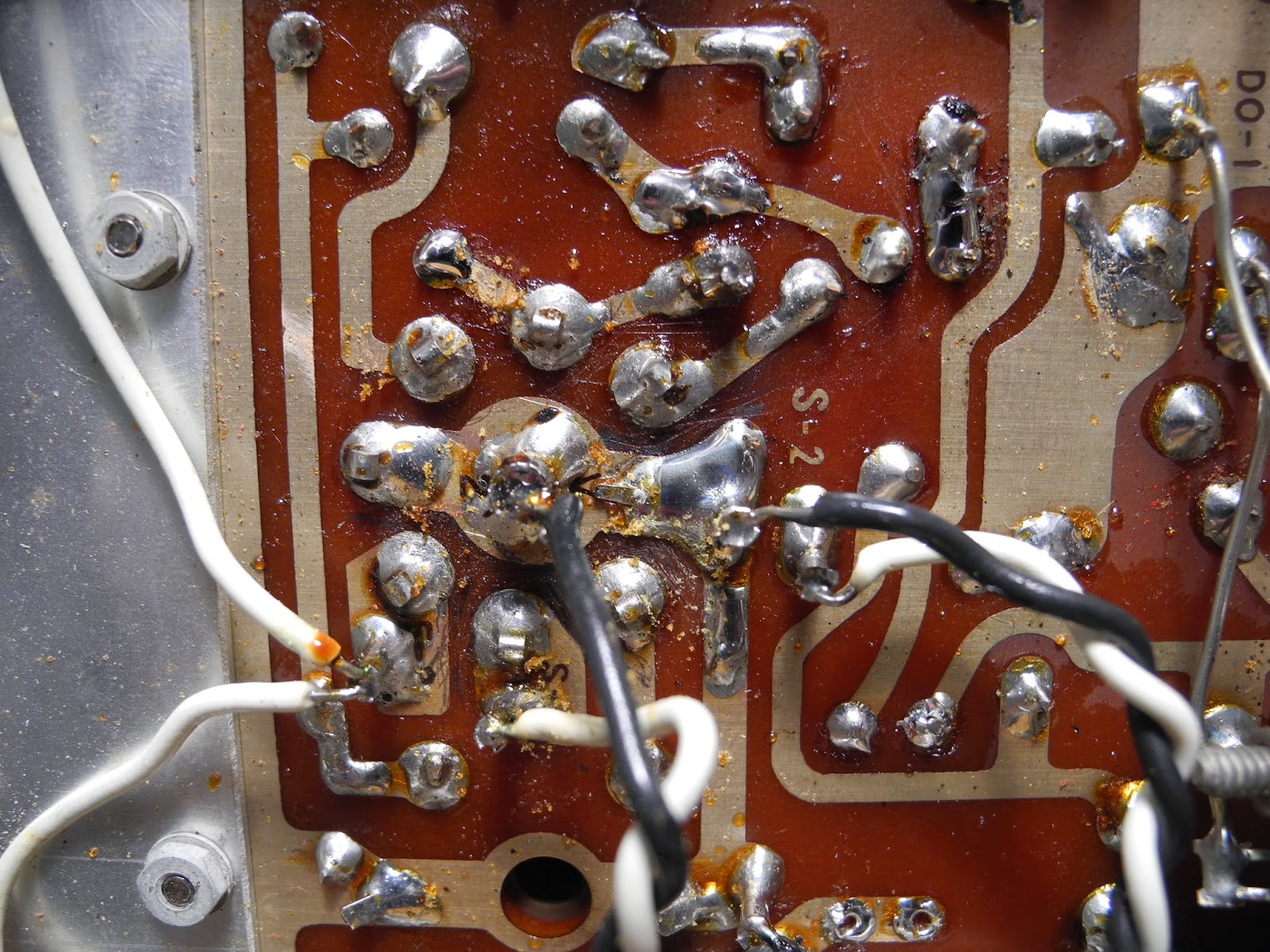 The printed circuit board really had a lot of rosin flux residue on it. On a hunch, I scraped some of it off, and the mysterious resistance to ground went way up. After cleaning the board with alcohol to remove the flux, the resistance became too high to measure. The S-meter also started reading on scale. Lesson learned - flux residue can cause problems in high impedance circuits. Obviously this flux was there since the kit was built but whether it caused a problem from day one or only later, who knows.

After a bit of tracing of the circuit I found the cause: two wires that crossed were touching where there was insulation missing and were shorted. One was the antenna lead and the other was from the local oscillator. After pulling them apart, the local oscillator started running on all bands.

I did a full alignment and it all went well -- I could align each band on each end of the dial. Because of the low 455 KHz IF frequency you have to watch out that you don't align to the image frequency that is only 910 KHz away from the correct one. The manual mentions this in the procedure, but I almost did this on one band and thought at first that I could not get it to align correctly. 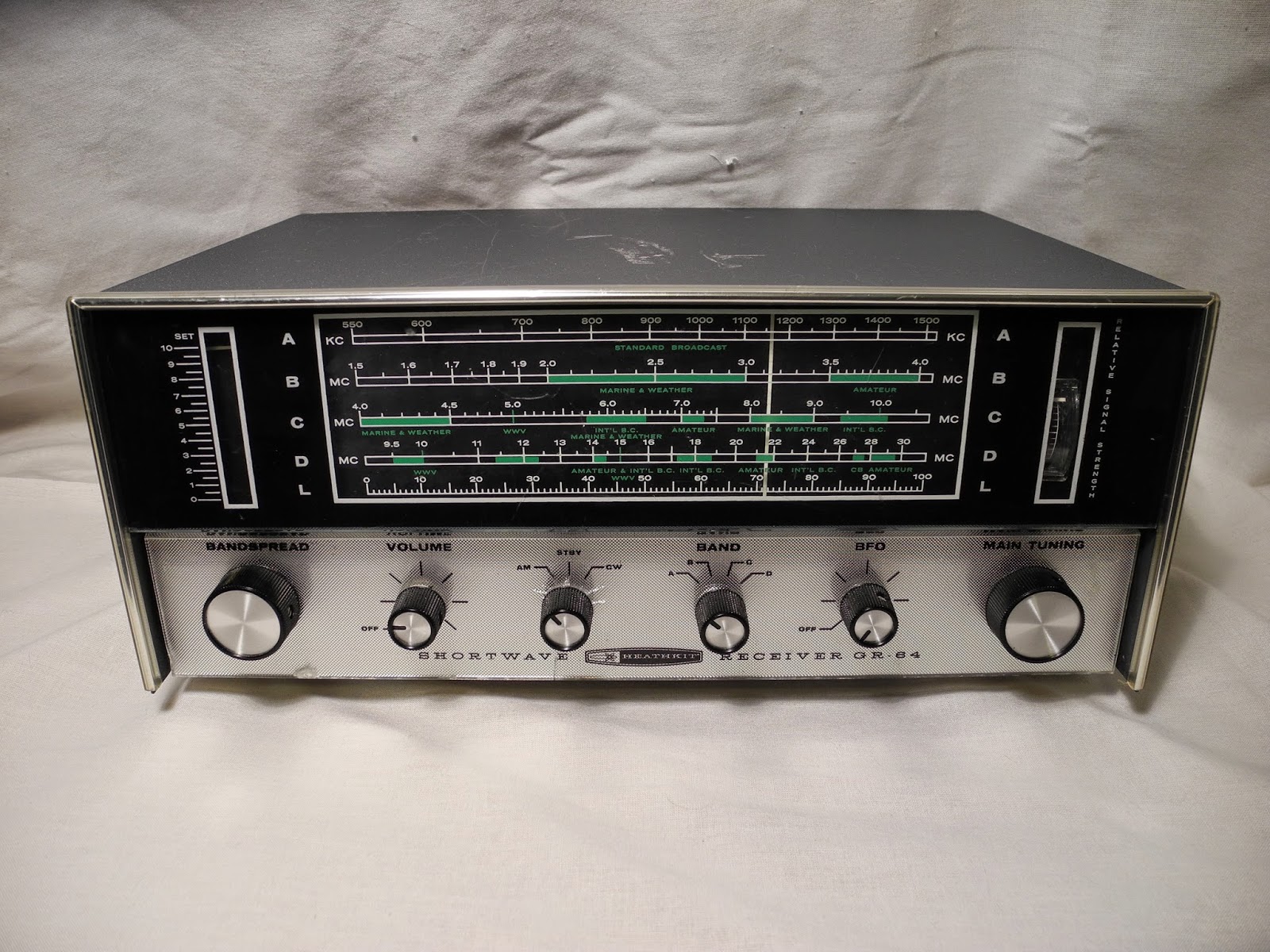 Restoration is now almost complete. The S-meter is still off scale for no signal, so I expect to have to tweak some of the resistors in the circuit.

The limited testing I have done indicate that the radio is reasonably sensitive and can pick up lots of shortwave broadcast signals with a decent antenna. It would not be very suitable for amateur radio, as bands like the 40 meter ham band only take up a small portion of the dial. The BFO is also hard to use as it is not very stable and interacts with other controls, so it could be used for strong CW signals but would be frustrating for SSB.

I plan to make a YouTube video on this radio as I have done for the other models I own, so watch for that in the coming weeks.

Hey Jeff ...
I'm glad I found your blog.
I have also bought a GR-64.
Unfortunately, he is very deaf.
In the evening I can on the band A from the middle to the right end
listen to some stations. If I turn to the left, he is always deaf.
I have no idea why.
A complete guide to the GR64 I have.
73 Dieter from Germany

S meter reverse protection
Total sensitivity became much greater than before. Once a strong signal was tuned, S meter went full, and the meter pointer sticked mechanically. To prevent this, I inserted a small silicon diode series to the meter.

Hi, Jeff! Any thoughts on a dead zone between 13 and 14mhz on band D, only when in AM mode? I found one of these at a fleaarket for $18, essentially in working condition. A few minor repairs and adjustments, and it picks up MW just fine, and I've been able to pick up at least one or two stations on each of the other bands. I've also been able to pick up my CB, which helpede confirm that band D does appear aligned.

I do believe I've stumbled onto at least one clue. Might be related to the poor image rejection I've read about with this model. At that frequency range, the main tuner becomes microphonic, and can be heard on another radio set on a nearby frequency placed next to it. I've found other frequencies that do this, just not as prominent. Does this, even when in standby. What's your thoughts?

Rosin flux of this vintage can cause problems after it is exposed to high moisture environment. When I was a tech in the factory where we made industrial controls. The first thing we did on aged boards that were returned for service that had rosin flux on them was to clean them thoroughly. Sometimes strangely flux this old comes off better with detergent and water we found out. AMazingly we often found it would not dissolve completely with alcohol and cleaning them with soap and water is good except where unsealed transformers or coils are found. We had a wash tank to wash old boards in that had an industrial detergent and water in it then we flushed them with clean water and dried them with a heat gun and compressed air. Air first then heat. There are a passel of ills cleaning can dissolve. These days I use acetone or naphtha. Naphtha is good where there are sensitive plastics involved. Acetone is great if you can get the board out. Place a rag under the board to absorb the dissolved flux and acetone or naphtha. The only downside of this is both are highly flammable. Use them with plenty of ventilation and don't let the fumes collect both have a low flash point.