Hugo Winner Book Review: Stranger in a Strange Land by Robert A. Heinlein 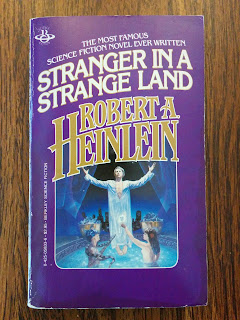 The inspiration for the book was said to come from an offhand comment Heinlein made in a speech (and later in one of his books) about the fact that no one ever wrote a book about a Martian named Smith.

Other than the premise of a human raised on Mars, the book is not heavy science fiction. The book was incredibly popular, becoming the first science fiction novel to make the New York Times best-seller list and had sold 5 million copies by 1997 and is still in print.

It's depiction of free love and commune living made the book controversial. The beliefs and politics in the book were substantially different from those in his previous novels. Friends of Heinlein have remarked that it reflected turning point in his personal beliefs from conservative to liberal values, which apparently also coincided with his marriage to his third wife. Heinlein claimed that he had planned and worked out the novel for years, but had to wait until society was ready to accept it. It was certainly in line with many of the societal changes that happened in the 1960s.

The book was even responsible for adding a new word, "grok", to the English language (and is recognized in the Oxford English Dictionary).

I've read the novel several times in the past, and enjoyed reading it again. I don't personally agree with many of the ideas in the story, but the goal of the author was to make the reader think and questions their values, and I fee that he succeeded.

I would rate this as the peak of Heinlein's career. Some of his later novels seemed to try to a similar approach but in my opinion came across as just trying to shock the reader. Overall this is an ideal novel for the non-science fiction reader.