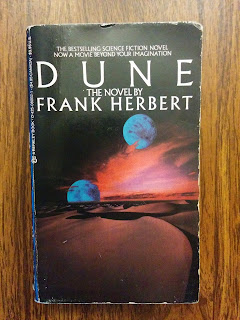 This novel won the Hugo award for best novel in 1966 and has been called the world's best-selling science fiction novel.

A sweeping novel, Herbert invented an entire universe with depth and detail like few other novels. It is alien, yet strangely familiar and could have taken place in another universe, or maybe in ours some time in the past or the distant future.

It spawned a series of novels. I first first read it in the 1970s, and remember seeing the spectacular failure of the 1984 film version by David Lynch.

I recall trying to read at least one of the sequels and was not able to finish it. Maybe I will give make another attempt.

The novel held up well on re-reading and, while long, is definitely a must-read for science fiction fans.
Posted by Jeff Tranter at 4:49 PM

I first read Dune after seeing David Lynch's movie.
I also read several to the sequel books, but the politics got just too deep for my young adult mind at the time. And each one was harder to read than the previous one.
I only recently watched the 2000 Mini series. It started well, but began to drag by the third episode.