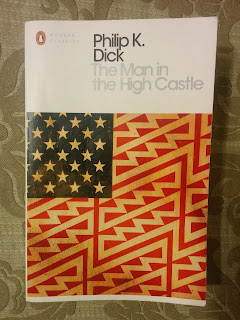 Winner of the Hugo Award for best novel in 1963, this is an alternate history story in which Germany and Japan won the second world war.

An unusual novel, the plot concerns a number of characters whose lives intersect. Taking place in the 1960s, it paints a believable picture of a possible future. An interesting twist is the existence in the story of a fictional novel that depicts a world where Germany and Japan lost the war.

It has an number of unusual and unexpected plot twists, but no satisfying ending.

Readers may be more familiar with the author's novel do Androids Dream of Electric Sheep? which was made into the film Blade Runner.
Posted by Jeff Tranter at 7:59 PM