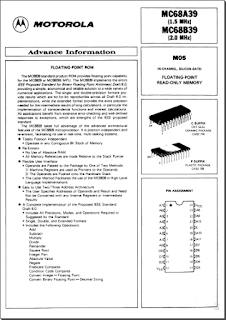 Implementing floating point math was a challenge with 8-bit microprocessors. The early version of BASIC for the 6502-based Apple 1 and Apple 2 series written by Steve Wozniak only supported 16-bit integer variables in order to keep the size down and achieve acceptable performance. Later, Applesoft BASIC was licensed from Microsoft which supported floating point variables. A significant amount of the code for Microsoft BASIC for 8-bit microprocessors was dedicated to floating point math. Some versions, loaded from tape, gave the user the option to leave out the sin/cos/tan trig functions to save space and free up some memory.

The 6809 supports instructions for 8-bit addition, subtraction, and division and some 16-bit math instructions. While more powerful than earlier processors like the 6502 and 6800, implementing floating point math was still a significant undertaking. Motorola saw an opportunity to offer a floating point math library as a standard product for the 6809. This was made more viable for two reasons:


Out of this came a product: the MC6839 Floating Point ROM. While essentially a software product, it was sold as hardware: an 8K ROM programmed with the floating point code. As well as the ROM, it included a programming manual almost 100 pages in length, describing how to use it. 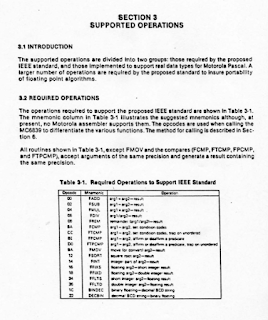 The basic features of the library were:


According to the source code it was written around 1980, with revisions up to at least 1982. The author names in the source code were Greg Stevens, Joel Boney, and G. Walker. In 1988 the source code was put in the public domain by Motorola, and can be found on the Internet as well as the binary for the ROM.

I came across the code and decided to try it out on my 6809 single board computer. There is a programming example in the manual that finds the roots to quadratic equations of the form ax^2 + bx +c = 0 using the classic formula -b +/- sqrt(b^2 - 4ac) / 2a

I typed in the example and adapted it to the lwasm assembler. The program uses a standard set of macro instructions to set up the parameters in the correct calling sequences for the ROM. These macros make the code much more readable and were easily ported to the lwasm assembler. I needed to make a few changes in order to make the example a complete runnable program. When run, and with the S record file for the MC6839 ROM also loaded into memory, I was able to get the example to run and produce the correct results. The code is on my github account.

Since I had the source, I took a look at whether I could assemble it. It would take some effort because the original source required a special Motorola "structured assembler" that I have not been able t find any information about. It has a number of structured programming macros for things like looping and conditionals. Given some time this could be reversed engineering by looking at the binary file.

I also found that the source does not quite match the binary (the former has a 1980 copyright date and the latter 1982). Without having a known good binary that corresponds to the source code, porting would be a challenge, so I set any further work on this aside for now.

The MC6839 Floating Point ROM was Motorola's first foray into this type of binary ROM product. The data sheet lists the product as "preliminary" and according to one source it was never actually offered as a product.

Jeff - I don't know if you've seen the discussion at https://www.facebook.com/groups/6809assembly/permalink/2316542701972432/ - I wrote a macro pre-processor to expand the macros in the floating point package source code. If it's any help to you, pick it up at http://gtoal.com/src/asm-expand/