Hugo Winner Book Review: The Moon is a Harsh Mistress by Robert A. Heinlein 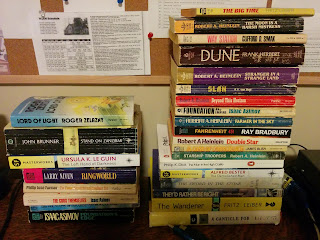 The winner of the Hugo for best novel in 1967, this was the sixth (and last) Hugo won by Heinlein.

It is pretty much classic Heinlein fare, with a good adventure story, interesting characters, and some bold predictions about the future. He also used it as a vehicle to promote some of his ideas on politics, the military, and marriage, but keeps it a little more restrained and less preachy than some of his earlier (and later) novels. It also has a little more humour than his earlier novels. 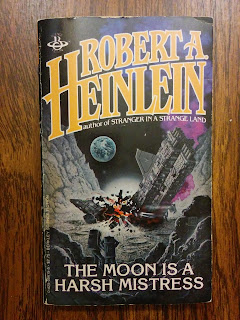 I had read it some time ago, but enjoyed it on re-reading. In some ways it seems more like his stories written prior to Stranger in a Strange Land, despite being written later. My only complain was that it used a strange plot device: the narrator speaks in a dialect of English influenced by Russian. The use of some Russian words was fine, but his speech takes on some features of Russian grammar, most notably omitting the use of the article "the". Find it makes for annoying read after while.

The novel also helped popularize the expression TANSTAAFL: There Ain't No Such Thing As A Free Lunch, although it was apparently in use before the book used it.

Reviewing Heinlein's bibliography, I would also say that this marked the last of his books that I really enjoyed. His later works (1970 and later) seemed to me to either repeat similar themes, and/or seemed to be written merely to shock the reader.
Posted by Jeff Tranter at 7:37 PM