A 6809 Single Board Computer: Cross-Compilers under Linux 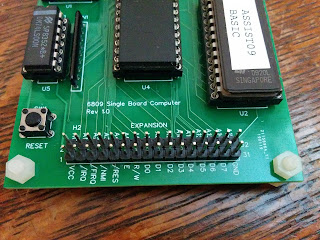 Assembling code by hand is possible, but for any program of non-trivial size, cross-compilation is the way to go, even for 8-bit processors like the 6809. When working with my 6809 single board computer I went looking for a suitable cross-assembler. My requirements were to support the 6809, run on Linux, and be freely available. I came across three suitable programs, which I'll briefly describe here.

This code is apparently derived from the original and official Motorola cross-assembler circa 1981. Written in very old pre-ANSI standard C, it was modified by a number of people over the years, and this version was last modified Albert van der Horst in 2004 to compile under Linux. I had no trouble building it under Ubuntu Linux.

As the official Motorola assembler, it follows the Motorola documentation. It seems pretty comprehensive, and supports the 6800, 6809, 68HC11, and some other chips in the 68xx series.

I have used this as my primary cross-assembler to develop or port the 6809 code I've been working on. The S-record files it generates are happily accepted by the ASSIST09 monitor's Load command.

Here is a sample output listing:

The only quirk I encountered is a known issue where it can produce invalid warnings about comments. I worked around this when needed by disabling warnings with a command line option.

Written in C, it is licensed under the GPL and is actively being maintained with the latest version being 2.11 released on 2018-07-27.

I downloaded the source and was able to build it with no problems simply by running the configure script, make, and sudo make install.

Trying it on my 6809 disassembler program (about 2000 lines of code), the only issues I encountered were that it didn't accept labels with a colon at the end and it didn't like one symbol I used that started with a dot. After making appropriate changes, the code built fine. It even warns that some long branches fit in eight bits and could have used short branches, so I modified them and made the code a little smaller. I did notice that it generated slightly different code than the as9 assembler had, where it picked a different (more efficient) indexed addressing mode that could use a 5-bit displacement.

Here is a sample listing:

It generated a Motorola S record (RUN) file, but the ASSIST09 firmware did not like to load it. Investigation showed that it was producing S record files with invalid checksums. I made a code fix to the source for this. It also doesn't produce the S9 record at the end of the file that ASSIST09 wants to see, unless you have an END directory specifying that start address.

LWTOOLS is a set of cross-development tools for the Motorola 6809 and Hitachi 6309 microprocessors. It supports a number of output formats including raw binary, Motorola S record, Color Computer binaries, and a proprietary object file format that supports linking.

It is implemented in C and is actively maintained. I used version 4.16 that was released in December 2018.

It supports a number of platforms. I was able to build it with no issues on Ubuntu Linux. It installs a number of tools including lwasm, lwlink, lwar, and lwobjdump.

Here is a sample output listing:

I only tried the assembler, using my disassembler program again. It didn't like items in FCB directives to be separated by any white space, only commas. It also didn't a like symbol starting with "." Other than that it assembled it fine, and generated a S record file which I successfully loaded and ran on the single board computer.

For advanced development work where you might want to assemble multiple files and link them, this looks like a good choice for a toolset. A 6809-based C compiler I have tried, CMOC, uses it as it's cross-assembler.

All three of these cross-assemblers look adequate for basic 6809 assembly language programming hosted on a Linux desktop. With a few changes I was able to get same source code for my disassembler to build with all three assemblers.
Posted by Jeff Tranter at 7:10 PM