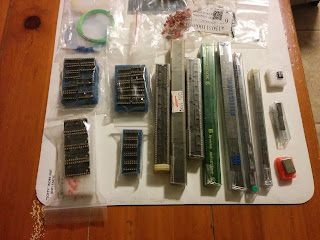 I generated a list of the needed parts with the help of KiCad.

My initial investigation to determine if the project was feasible indicated that some parts are still available new, and the rest should be obtainable as used or NOS (New Old Stock). Most TTL chips, for example, are all readily available. These had to be through-hole parts as I want to keep this a retrocomputing project with vintage parts and not use any modern surface mount components. The majority of parts will be wirewrapped on socketted on a proto board.

I had some parts on hand, and bought a good number of the parts from one vendor, Unicorn Electronics, which carries a lot of older components. They even stocked the RAM, EEPROM, 6850 ACIAs, MC14411 baud rate generator, and 1.8432 MHz crystal.

Other miscellaneous parts were bought individually on eBay. This included:


PCB prototype boards suitable for wirewrapping are available cheaply on eBay. I bought a few sizes as I wasn't sure how big the board would end up being.

I wasn't able to find a 64-pin wirewrap circuit. It is a somewhat unusual size for DIP packages. I plan to make one from pieces of smaller sockets.

Prices on eBay are generally good, but ordering from China can mean as much as a couple of months to get the parts. The protoboards are the last to arrive - after almost two months they had not shown up so the seller had to resend them, causing quite a delay in the project. In fact, as of this writing I am still waiting for them. Another delay was a home renovation that meant I was not able to use my workshop for a period of time.