I wanted to write another game for the Replica 1, and after considering a few alternatives, I decided to write a computer version of YUM, a game that is popular with our family. 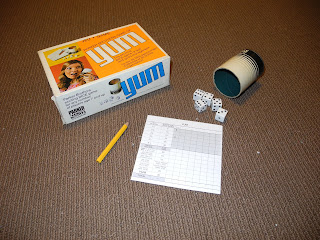 YUM is a dice game, similar to games known as Yahtzee, Yacht and Generala. Each player rolls five dice up to three times and then applies the dice toward a category to claim points. The game has 12 rounds during which each player attempts to claim the most points in each category.

The winner is the person scoring the most points at the end of the game. This version supports up to three players of which any can be human or computer players.

It would be a little frustrating to write in BASIC and tedious in assembler so I wrote it in C using the CC65 6502 compiler/assembler. This had the advantage that I could develop and test it on a desktop Linux system. 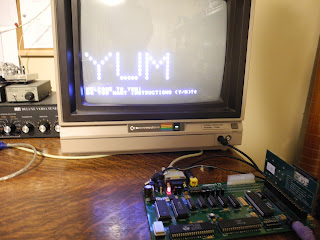 There is nothing particularly novel about the code. The computer players play a relatively good game based on some simple rules. The game could support more than three players by changing a compile-time constant -- the only limitation is that the screen size only conveniently fits a table of scores for three players. 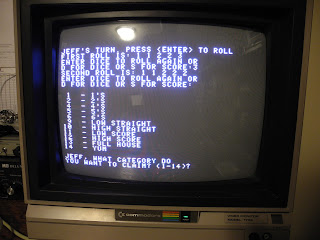 Because it was intended to run on the Replica 1 it was kept small and efficient to run within the 32K memory limit and only use uppercase characters and fit on a 40x24 character screen. 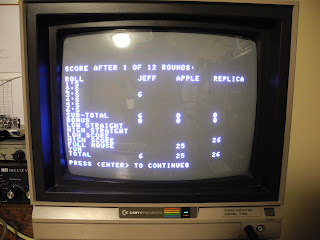 The source is released under an Apache license. Both the source code and a binary that will run on a Replica 1system  can be found at here.

If you want to run it on a real Apple 1 or similar, you will need to have just over 16K of RAM. With a little effort I could probably get the code size down a little to fit in 16K (the Replica 1 has 32K).


For my next Replica 1 project I am eagerly awaiting the Apple Cassette Interface kits that Vince Briel is offering. I expect to be one of the first beta testers for this, and I have a cassette tape player ready to go.