Time for Some Machine Language Programming

I haven't done any 6502 machine language or assembly programming since about 1985. With the Replica 1 it is time to try my hand again.

I learned machine code programming on my old Ohio Scientific Superboard computer. As well as BASIC in ROM it provided a simple machine language monitor program that let you examine and change memory and run programs. You could also load programs from cassette tape. Despite having a screen and keyboard, the monitor was more primitive than the Apple 1 "Woz" monitor, only letting you examine one memory location at a time.

The main book that helped me understand 6502 machine language programming was Programming a Microcomputer: 6502 by Caxton Foster. 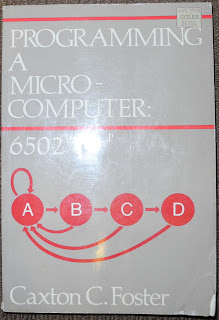 Later when I had an Apple //e the Don Lancaster book below helped me understand how to use the Apple EDASM assembler: 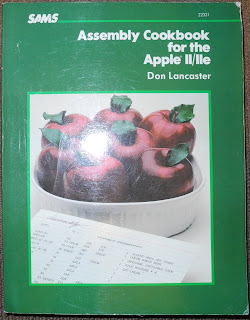 I still have my handy 6502 Reference card: 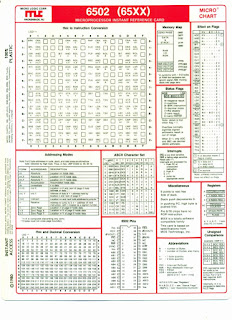 The largest machine language program I wrote for the Ohio Scientific was a tank battle game that used character graphics and supported two players with joysticks.

With the Replica 1 I wrote some small standalone assembly code starting with the "hello world".  In fact the Apple 1 manual includes a simple program to type into the Woz monitor and it is reproduced in the Replica 1 manual.

Looking for a little larger project, I decided to write a small machine language monitor. Initially this was just going to be a way to dump memory in a more conventional and fast format. Then I added some more commands.

The functionality overlaps with the Woz monitor and Krusader's mini monitor, but it was meant more as a learning exercise and not really as a useful tool.

The program prompts the user for commands which all start with a single letter. At any time you can hit

This displays a summary of the valid commands.

This dumps memory in hexadecimal and ASCII a screen at a time. At the end of a screen you can continue by pressing

This fills a range of memory from a start to end address using an 8-bit data value.

This copies memory from the source start and end location to the destination. The memory can overlap only if the destination is greater than the start address.

This verifies that two ranges of memory match. Any mismatches are reported (see an example later). It is used to verify that a copy command was successful.

This converts a 16-bit hexadecimal value to decimal. It uses signed decimal numbers as in BASIC.

This command runs a program, starting at the given address.

This runs the Woz monitor.

This runs the Krusader mini-monitor.

This runs the Krusader Assembler.

A screen shot is shown below: 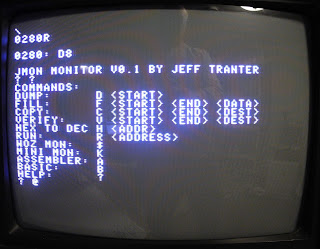 Here is the output captured from a sample session, with some comments added in italics and commands I typed in bold.

Convert some hex numbers to decimal:

Jump to the Krusader mini-monitor:

Here are some notes on the implementation of the code.

It was written using the CAS65 cross-assembler. This archive file includes the following files:

Depending on the version of Krusader you have, you want need to adjust the values of MINIMON and KRUSADER in the code to match the start addresses for your version. Mine were set for Krusader version 1.3.

There are some routines that you might find useful in you own programs, such as the PrintString routine. Feel free to do so. Some of these were based on code examples taken from 6502.org.

The code to convert hex to decimal is a little hairy. I based it on some example binary to BCD code and then made changes to support negative numbers and suppress leading zeroes.

The copy memory routines could be smarter and handle a copy to a lower overlapping address, but I didn't bother to implement this. I did add a check for valid addresses.

Most of the code is well commented and should not be too hard to follow. If you have any questions or comments, feel free to contact me.

Update: The source code and binary can be downloaded from here. I made a version 0.2 which adds a search command.

Hey Jeff, I might need some help with Chapter 7 of Programming a Micro-Computer: 6502

The book is very informative, however it leaves out all machine code as well as addresses, and only gives you the assembly language.which is why I may need help with Chapter 7.

I have watched your YouTube channel on the KIM-1 and you do a very good job at presenting the information.

I think I ended up purchasing this book as well as the CORSHAM add on boards for the KIM-1 due to those videos.

Anyway, hope all is well. Thank you for the time that you have dedicated, to presenting all the information on the KIM-1 that you have put up on your Youtube channel.

If you have more info on the KIM-1 posted anywhere else, I would love to take a look at it.