In cleaning out my basement recently I came across a page from an old issue of Electronics Today Magazine from May 1981. It was an ad for Exceltronix which included my first computer. 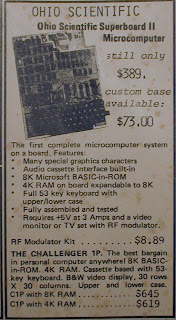 In 1980, after quite some research, I bought my first computer: An Ohio Scientific Superboard II. At the time it was the best bang for the buck on the market: a complete single board computer for US$279 ($389 Canadian in the ad).

It included a 1MHz 6502 processor (same as the Apple 2), 4K RAM expandable to 8K, on board Microsoft BASIC, a keyboard (on the motherboard!), and a cassette tape interface for storage. At the time an Apple 2 was well over $1,000 (although cheaper clones were on the market). This was before the introduction of the Commodore VIC20 and IBM PC.

I sprang the extra money to expand it to the full 8K of RAM (thats 8000 bytes, what a luxury!). I had to build my own case, 5V power supply, and RF modulator (to connect to a black and white television) and add a standard cassette tape recorder for mass storage.

I spent many hours with this machine learning BASIC and 6502 machine language before I moved on to an Apple 2 and then IBM PC compatibles.
Posted by Jeff Tranter at 9:41 AM