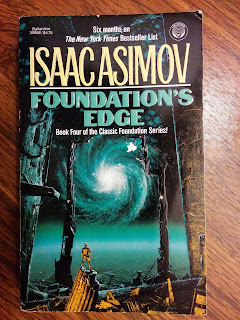 Isaac Asimov wrote the award winning Foundation trilogy, originally as a series of eight short stories published from 1942 through 1950, and then in the form of three novels. One portion, "The Mule", won the Hugo in 1946. The trilogy won a Hugo for "Best All-Time Series" in 1960.

Despite requests from fans, he wrote no more books in the series until 1982 with the publication of Foundation's Edge. The novel, winner of the Hugo award in 1983, continued the series and took place after the events of the first three books.

I believe what got Asimov motivated into writing a sequel was the challenge to tie the Foundation series in to many of the other novels he had written subsequently. He is able to weave into this novel references and themes from his novels The Stars, Like Dust, The Currents of Space, Pebble in the Sky, The Caves of Steel, The Naked Sun, The End of Eternity, and his robot stories.

Like the original series, the book is not for everyone. It is heavy on dialog, has many characters, and a plot that has many unexpected twists and turns. Readers looking for space battles, monsters, and aliens will be left wanting.

I read this novel some time ago, but read it again as part of the Hugo award reading challenge. I thoroughly enjoyed it.

Asimov subsequently wrote more novels in the series, but he never again won a Hugo for best novel.
Posted by Jeff Tranter at 6:39 PM