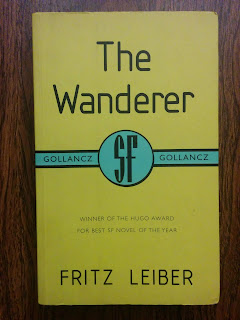 Winner of the Hugo for best novel in 1965, this is a story about a mysterious moon-like object that encounters the Earth and causes major destruction. I found the novel rough going -- it has a style with more than ten sub-plots occurring simultaneously, and switching between them very quickly, almost every paragraph. The many different characters in different locations were hard to follow. I didn't really buy into the story until close to the end where I found it more interesting, but much like novels by Arthur C. Clarke, it never fully explains what was happening. It has some in-jokes that give nods to other science fiction stories and authors, and pokes fun at a group of flying saucer enthusiasts, but I would not describe it as a humorous novel.

I had similar feelings about his novel "The Big Time", so I won't be adding Leiber to my list of favourite SF authors.
Posted by Jeff Tranter at 10:03 PM