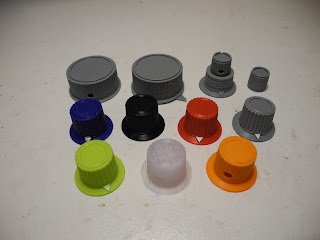 I recently acquired a 3D printer, a LulzBot Mini. My son also has a Prusa Original i3. An interesting application for 3D printers is making replacement parts that are difficult or expensive to obtain. One that immediately came to my mind was knobs for Heathkit equipment. 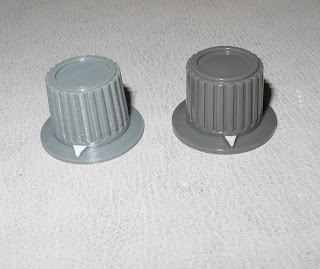 My son did the first attempt at making one of the most common knobs used on the so-called Classic I style of Heathkit equipment, commonly used in test equipment and amateur radio gear. It came out quite well. I subsequently added models for the larger and smaller versions of these knobs, a version with two concentric knobs, and a pointer. 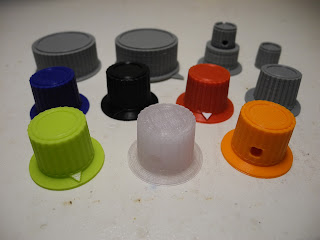 I used an open source CAD program called OpenSCAD which uses a scripting language that is easy to learn for most people with some programming experience. It works well for designs that can be mode up from primitive shapes like cylinders, cubes, etc. 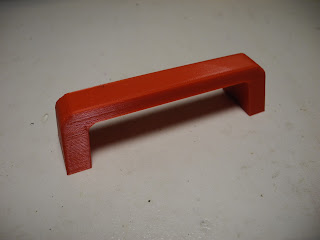 I have a number of units of Heathkit test equipment that are missing the same carrying handle. It seems that people often removed the handles so they could stack the equipment. I also designed a replacement for the handle that works quite well. I replaced the handles on four units that I have. 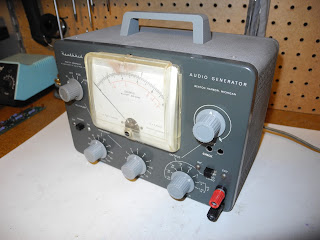 I used a material called PLA, which is an inexpensive, strong, and non-toxic plastic. There are many different materials and colours to choose from. I used the highest quality, which isn't on par with the original knobs but I think it is completely acceptable for test equipment that you intend to use. I have a number of units that were missing some knobs, like the unit above which has two original knobs on the left and two 3D printed replacements on the right (as well as the handle).

The files are freely available on Thingiverse, one of the most popular 3D model sites. The original files are here at this github project. They are licensed under a Creative Commmons license. I hope to make some more designs in future.
Posted by Jeff Tranter at 8:46 PM

Very nice, how much would it cost to print me up a complete set of Heathkit knobs for my AG-10, the classic grey type?