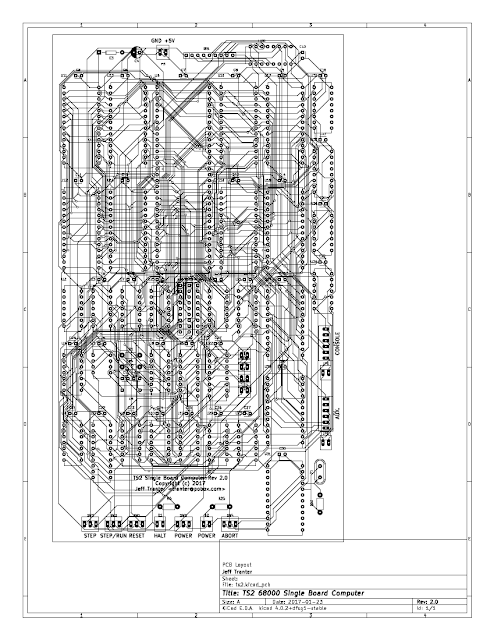 Plot of PCB Layout from Kicad

I spent some time learning how to use Kicad's PCB layout software and created an experimental board layout. I had never laid out a circuit before using CAD software before, so there was some learning curve and I may have made some rookie mistakes. The routing was all done using the FreeRouting software. The resulting layout is quite complex but looks pretty good. It is a double-sized board, and based on the board size, it looks like it would cost about US$200 - US$250 to have three high-quality boards made from a supplier like OSH Park, and less from some manufacturers in China. Before I did that I would probably carefully review the layout a little more.
All files can be found at github.

3D Rendering of PCB Layout from Kicad
Expensive? Well, I just saw a Motorola MEX68KCB MC68000 Educational Computer Board show up on eBay. The minimum bid is US$295. It will be interesting to see if it sells.
Posted by Jeff Tranter at 8:11 PM

Brilliant project, I just love these old cpus! I'd like to see the finished pcb.

Jeff, take a look at this chinese manufacter pcbway.com. A friend of mine bought some boards in there and they were good. I'll like to see the finished PCB in a follow up video. By the way, I really enjoy your videos, really in-depth and quite informative.