Here are some notes on design and theory of operation of the Superboard ///. This was gleaned from looking at the circuit and I may have got some details wrong. Refer to the schematic diagram that is included on the CD.

All parts on the board are through-hole, making it easy to assemble. All ICs are socketed, and the board is silk-screened with component designations and values. Vince Briel says that the blue solder mask used is a tribute to the blue color scheme that Ohio Scientific used in their line of computers. About half of the board is taken up by the 53 keyboard keys. 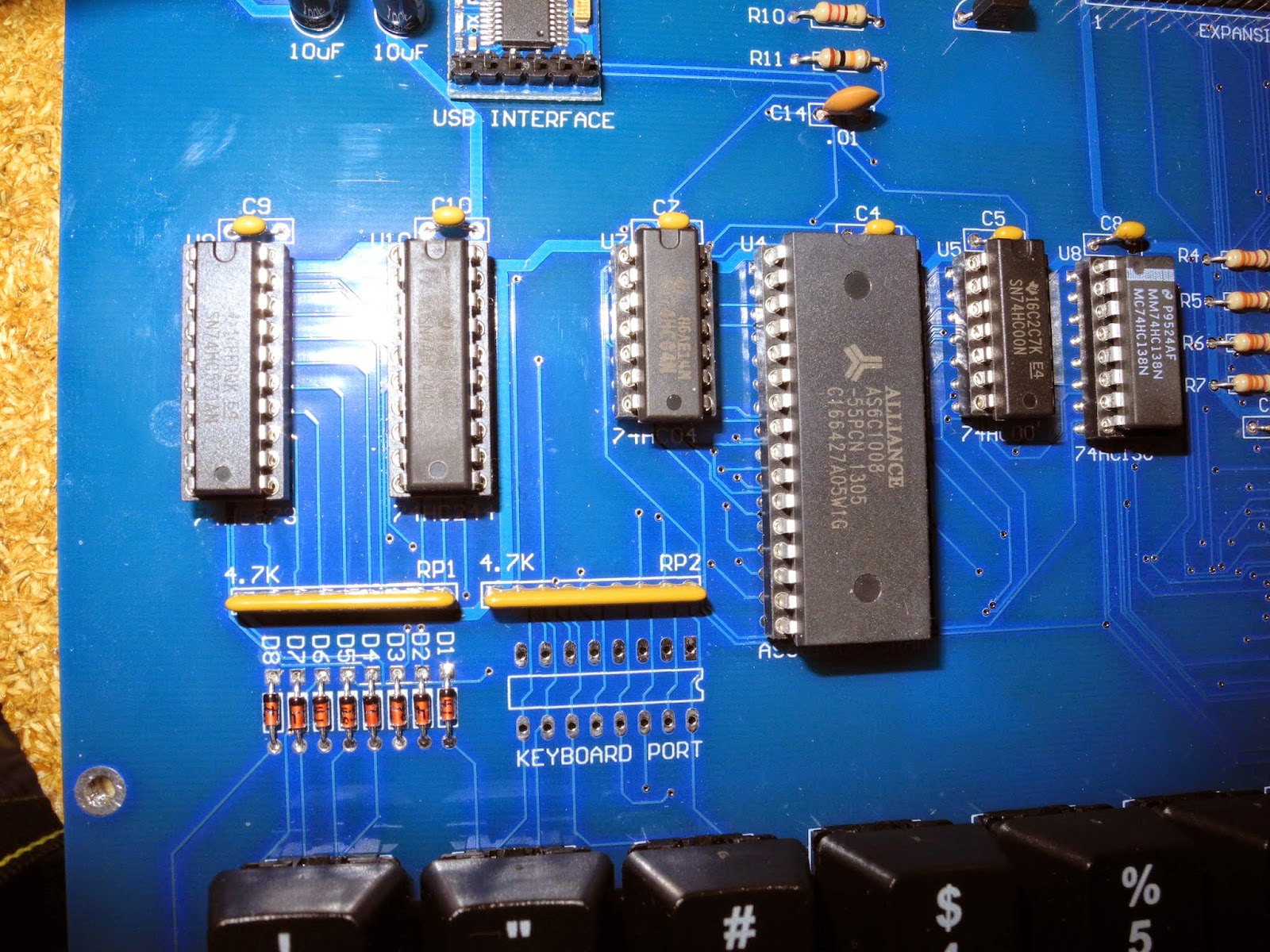 Power comes in as +5V via the USB port through the USB to serial FTDI board. Vince Briel recommends a 1000 mA or more USB power supply but the USB 2 standard calls for 500 mA from a host (computer) and the board typically takes about 115 mA, in my measurements. Note that the power switch comes after the USB to serial board, so the serial board is always on and takes some power. The power LED is after the power switch.

The original Superboard took a lot more power and was specified as needing a 5 volt 3 amp power supply. Power consumption depended a lot on the amount of RAM, e.g. whether 4K or 8K was installed. I remember on mine that a lot of the chips on the board ran quite hot, especially the 2114 RAM chips. On the Superboard ///, the only chip that gets warm at all is the 6850, which is the only non-CMOS chip on the board.

The USB to serial board is a low cost off the shelf FTDI board. These can be ordered from various suppliers from China and the SKU on the package matched one from http://www.banggood.com. There are some units on the market which have fake FTDI chips; this seems to be a legitimate one. It also just happens to have a blue solder mask that nicely matches the main board. It looks like Vince replaced the original right angle header on the board with a straight one, as it appears to have been hand soldered. 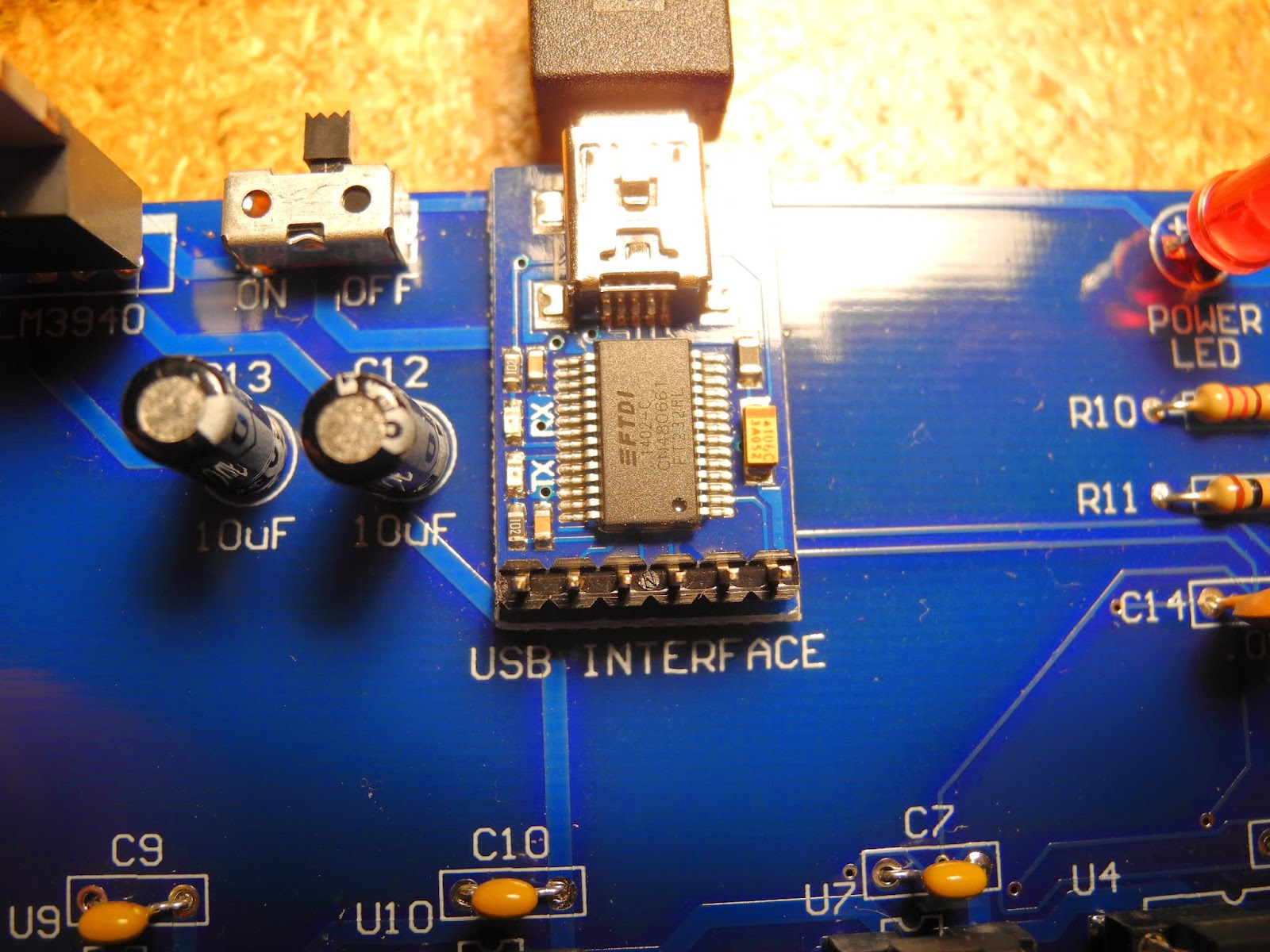 The DTR line of the USB to serial board goes via a cap to a transistor switch to the RESET line of the Propeller switch. This allows the Propeller to be reset from the serial port as part of the protocol for in-circuit programming. Arduino boards use a similar scheme. On Linux systems you may find that when you open the serial port it toggles DTR and resets the system, which is annoying. You can disable this using this command:

The Parallax Propeller chip is an interesting device that contains eight 32-bit processors which can run independently and communicate via shared memory. It has hardware on-board to assist with generating video signals in software. a serial port, and can load a program from an external serial ROM on powerup.

The Propeller CPU does some of the emulation, most notably generation of composite video in one of two video modes, and emulation of the ROM and video RAM for the 6502. It runs at 5 MHz. On reset it loads its firmware from the serial EEPROM, a 24LC256 32Kx8 serial EEPROM. This is a standard feature of the Propeller. With the Propeller development tools (which are free) you can reprogram either the Propeller or the EEPROM via the serial port from a host computer. All of the source files for the firmware are included on the Superboard /// CD.

Vince Briel, with help from Jac Goudsmit, wrote the firmware for the Propeller chip which is included on the CD. They had to use some creativity to implement the emulation in real-time and within the available pin contraints on the Propeller CPU chip. I have not looked closely at the code. It is written in the BASIC-like SPIN programming language as well as some assembly language.

The video by default is monochrome with 25 lines by 25 characters. If you hold down the BREAK key on powerup, it uses a 32x32 video mode that some models of OSI computers also supported. However, BASIC always only uses 24x24 characters for display. The Superboard /// supports the same character set font as the Superboard II, offering 255 characters including a number that could be used for games and graphics.

The BREAK key on the key board goes to an input of the Propeller so simulate reset operation. The software requires holding it down for 3 seconds to avoid accidentally hitting it. Contrary to what the manual says, on reset you do not lose any program in memory. A BASIC warm start ("W" from the boot menu) will preserve any BASIC program in memory. The random screen on powerup is simulated in software to act like the original Superboard (interestingly, the one I owned had a powerup reset circuit and did not do this, it also had a 3 second delay on the BREAK key). At the upper left of the "random screen" is the firmware version number (currently 0.06).

The 6502 is a Western Design Center 65C02. It is clocked at 1 MHz for compatibility with the Superboard II but can run at higher speeds (mine is a 14 MHz part). It runs at 3.3V. Between the Propeller chip, glue logic, RAM, etc. it runs in a standard fashion even though some hardware like the ROM is emulated by the Propeller. Incidentally, the 65C02 has some additional instructions over the original 6502 that can be quite useful. It is backwards compatible, with the new instructions using what were invalid/unused opcode on the original 6502. It is also much lower power than the original 6502.

The RAM uses a real RAM chip rather than being emulated. It is an AS6C1008, which is a 128K x 8 chip but only 32K is used as this was the maximum that the Superboard II supported.

The 6850 ACIA provides the serial interface. This is the same chip that was used on the original Superboard II, ensuring software compatibility. It is made by Motorola and was the standard UART at the time for the 6800 series of CPUs. It is interesting that Ohio Scientific did not use the more powerful 6551 ACIA that was made by Motorola for the 6502 series (it may not have been available at the time, or possibly it was more expensive). The 6850 is the only chip that runs on +5V, and is no longer manufactured, so new old stock chips have to be obtained. Mine has a date code of 8507 (the seventh week of 1985). It runs at 9600 baud, unlike the 300 baud of the original Superboard. On the Superboard II is was usually used for the cassette tape interface. Since the baud clock is being generated by the Propeller chip, you could change it in the Propeller firmware, although there is no hardware handshaking and the 6502 when running BASIC cannot keep up to 9600 bps and needs delays added to avoid data loss.

The keyboard circuit is similar to the original Superboard II. The key switches are arranged in rows and columns. A register can select one of 8 rows of keys and drive it low. The register is then read back to detect which, if any, keys in each column of that row are pressed. The software scans each row in turn to detect key presses. This is a simple design but has some side effects, most notably that there is no latching or typeahead of keys pressed, you can only tell if a key is pressed at the time it is scanned. It does mean that you can detect if multiple keys are pressed simultaneously, and independently detect the left and right shift keys. The BREAK key is not part of the keyboard scanning circuit. 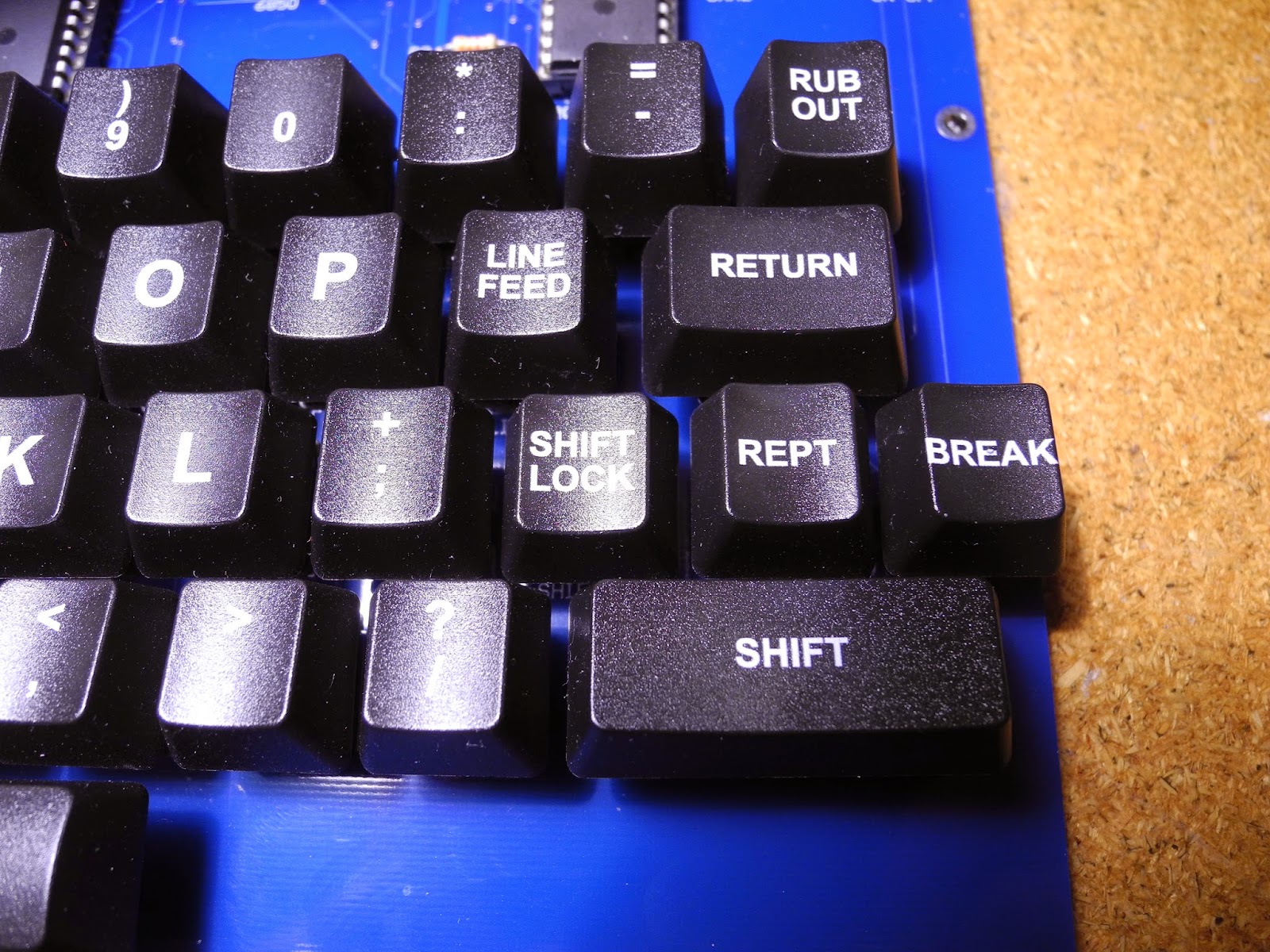 SHIFT LOCK is a latching key and is typically on to enable uppercase characters only as BASIC did not recognize lowercase characters in keywords or commands. The keyboard circuit uses a few discrete TTL chips for the read and write registers and for address decoding. The keyboard row and column signals are also brought out to a 16-pin DIP connector (not included) on the board so that you could connect an external keyboard, if desired. The original Superboard II did not have this connector.

The keys are high quality units made by Cherry, and the key caps are custom and made by WASD Keyboards. The latching SHIFT LOCK key is no longer manufactured, so when the supply runs out Vince will have to ship small slide switches instead (there is a place on the board to install one).

More address decoding is done by a 7HC138 decoder, and some of the signals go back to the Propeller CPU to help it identify when certain blocks of addresses are selected so that ROM and video memory can be emulated. This reduces the number of signals that need to go to the Propeller CPU.

A 40-pin expansion connector brings most of the important signals out so that in theory peripherals devices could be added. It is similar to the expansion connector on the original Superboard II, but uses a different connector since it is not electrically compatible with the Superboard II, using 3.3V rather than 5V levels. It would be an interesting project to interface the Superboard /// with one of the original Ohio Scientific floppy disk controllers so that it could run the disk operating system.

The original Superboard II has a cassette tape interface that ran at 300 baud and followed the Kansas City Standard for storing data on audio tapes. This circuitry is not included on the Superboard ///, as the higher speed serial port is a more convenient way to transfer files. There is a 10-pin connector that brings out the relevant signals so you could implement a tape interface if you desired.

That's pretty much it. There's not a lot of circuitry on the board, especially compared to the original Superboard II, which has to do things like generating the video using discrete logic, and used more than 70 ICs. You could even simplify the design by replacing the 6 TTL chips with a PAL, for example, but that would take away some of the retro design. 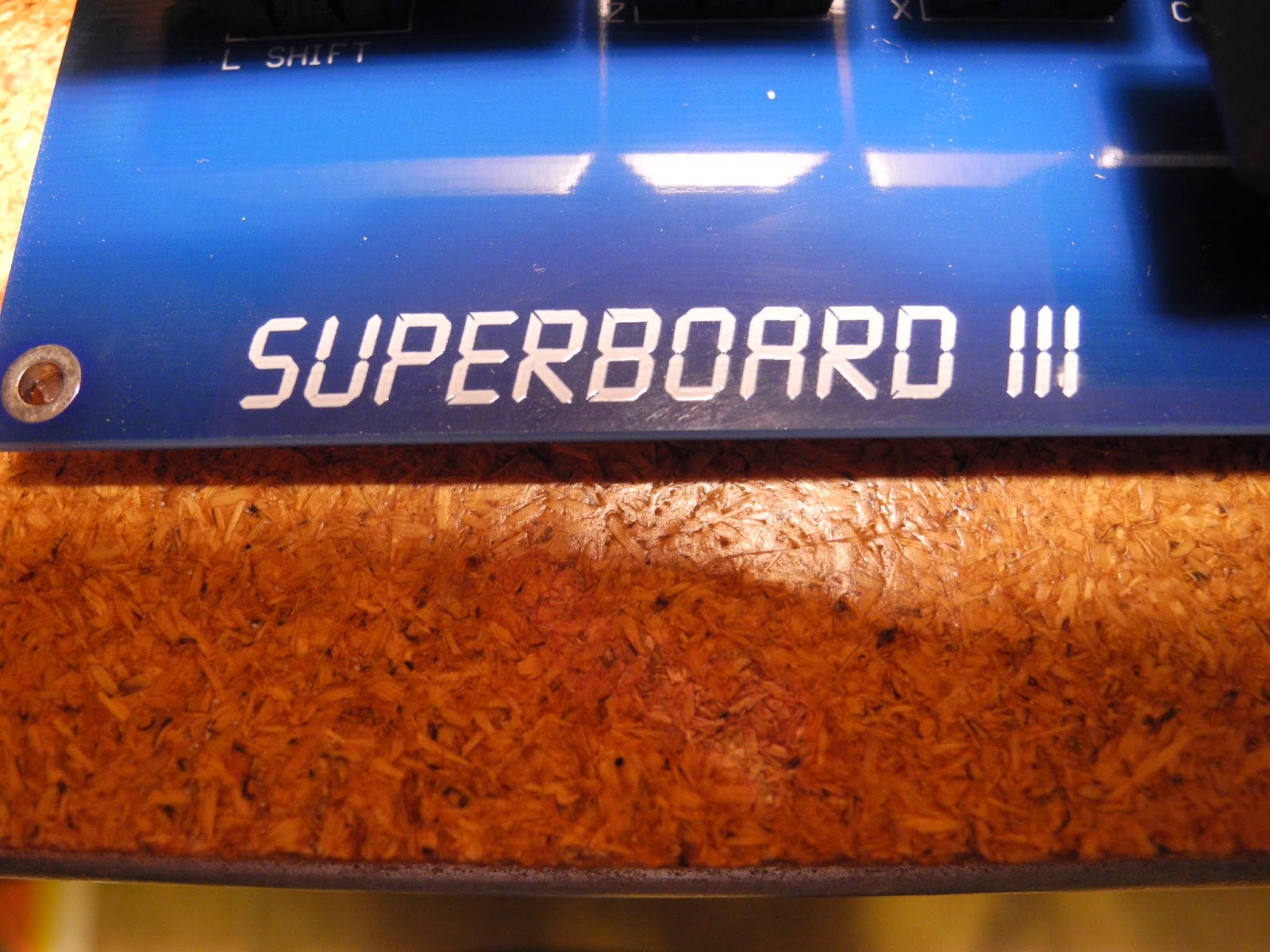 By the way, the name Superboard ///, is clearly derived from wanting to be the logical successor of the Superboard II, and calling it /// is a nod to the (infamous) Apple /// computer which was the successor to the Apple II.
Posted by Jeff Tranter at 8:59 AM

Hi Jeff,
I enjoyed your article and youtube coverage of the superboard iii system. I was disapointed that I did not learn about this project until it was no longer available. Do you know if the circuit board or the Gerber files are available anywhere?

Keep up the good work.
Chris