A Summary of Heathkit Shortwave Radios

In this blog post I'll give an overview of the different models of shortwave radio receivers that the Heathkit company offered over the years. The scope only includes the models that were intended for shortwave broadcast listening and not radios that could receive amateur radio bands only. I also consider only those were offered as kits -- Heathkit resold some fully assembled radios from companies like Panasonic and Zenith toward the end of the kit era.

Heathkit was well known as a manufacturer of electronics in kit form. Their product line included amateur radio, test equipment, and various consumer products. By building a piece of electronics you could save money and gain the satisfaction of having assembled it yourself.

A large part of their product line was shortwave and amateur radio equipment. At any given time Heathkit typically offered several shortwave receivers in different price ranges.

The table below (click to enlarge) summarizes the models of radios, listing their prices, the years over which they were offered, and the key characteristics and features. I'll briefly discuss each of the radios individually.

Some entries in the table are somewhat arbitrary. For example, under BFO I list "Y" if the radio could receive CW or SSB transmissions, even though technically in some cases the design used a product detector rather than a beat frequency oscillator (BFO). In general, more features tended to be reflected with higher prices, but the features don't tell the whole story. The better and more expensive receivers also tended to have better specifications (sensitivity, selectivity, stability, etc.)

The selling prices varied over the years that the models were offered and in the country in which they were sold (Heathkit issued separate catalogues in Canada, for example, with prices in Canadian dollars). In the table I've attempted to list the retail price in US dollars in the year the model was first offered. I've also included prices converted to equivalent 2012 dollars, taking inflation into account, so that prices can be compared fairly.

The table above (click to expand) shows diagrammatically the years over which the models were offered. The longest running models were the SW-717 and GR-81, both offered for 12 years. The AR-1 and GC-1 were only offered for 3 years each, but had similar models replace them (the AR-2 and GC-1A respectively). The greatest number of models were offered from the mid-1960s to early 1970s with as many as six different models on the market during some years.

Assuming the dates are accurate (and sometimes Heathkit stores sold models not listed in their catalogue), then no SWL receivers were offered in 1983. I have a Spring/Summer 1983 catalogue which confirms this.

In this section I'll briefly run through each model, mentioning some key characteristics.

This was the first shortwave radio Heathkit offered (other than some early "all-wave" receivers before Heathkit really got seriously into the kit business). Introduced only a couple of years after Heathkit's first kit product, the O-1 Oscilloscope, it was a basic shortwave radio utilizing six tubes and covers the AM broadcast band up to 20 MHz in three bands. It had no built-in speaker, no headphone jack, no BFO, and no bandspread. It featured a phonograph input and tone control, features that no later radio would have. The metal case was optional and cost an additional $4.50.

This radio was an improvement over the AR-1. Looking similar, it added a built-in speaker, bandspread, BFO, RF gain control, AVC, noise limiter, and headphone jack. The cabinet was now wood but was still an optional extra. 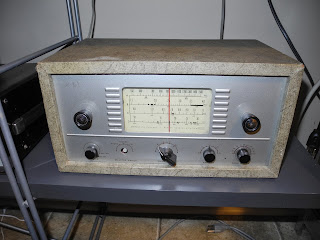 Third in the AR series, this was similar in appearance to its predecessors. The tube count was reduced to five but with no loss of features. It covered four bands. It had better selectivity that the AR-2 and also supported an optional Q-multiplier to further improve selectivity. The wooden cabinet was still optional.

The AR series were the least expensive radios offered, selling for the equivalent of just over $200 in today's dollars. It is rather astounding that today a basic desktop computer can be bought for this price. 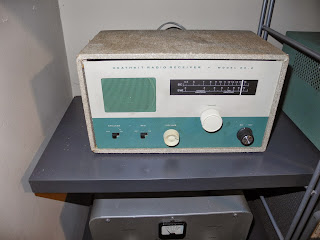 This was sold as part of a course on basic radio. The course EK-2A covered basic radio concepts and built up a two-tube regenerative receiver. Course EK-2B continued the course and expanded the radio to a 6-tube 2-band superhet receiver that could receive the AM broadcast band and shortwave from 3 to 10 MHz. It has a BFO and speaker. The case was an optional extra. Unlike the AR series, which had silver front panels, the EK-2B looked more like the traditional Heathkit blue styling. 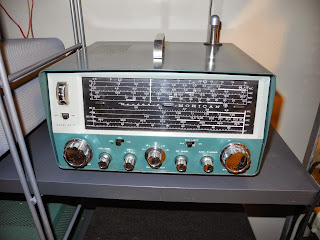 Dubbed the “Mohican”, these can be considered the same model as there were only very minor differences between the GC-1 and GC-1A versions. This was Heathkit's first all solid-state receiver, and is believed to be the first all solid-state shortwave radio on the market. It featured five bands with a calibrated bandspread for each ham band and the 11 meter Citizen's Band. With it's 54 inch telescoping antenna, carrying handle and battery pack with 8 C-cells, it as considered a portable radio. There was an optional AC power supply that was installed in place of the battery pack. Most remaining units have the AC supply but have lost the battery pack.

The last of the vacuum tube receivers, this was considered Heathkit's top of the line radio. It sported five bands. Features include a speaker, crystal filter, product detector, S-meter, and dial light. A somewhat strange and unique feature is a morse code key jack that can be used to practice morse code. The plastic front panel cracks easily -- almost all units I see up for sale on eBay have cracked panels to some degree.

This was a basic receiver (less than half the price of the GR-54 made during roughly the same time period). It offered 4 bands with a BFO, bandspread, and S-meter. Sensitivity, selectivity, and stability were not as good as GR-54. Also suffers from the same front panel cracking as the GR-54. 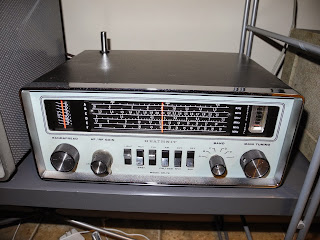 This was a solid state portable unit that was smaller than and considered a replacement for the GC-1A Mohican. It featured six bands and is double conversion on the highest band. It has a crystal calibrator, telescoping antenna, and carrying handle. It can run on built-in rechargeable NiCad batteries (most batteries have failed by now but can be replaced with new ones) as well as 120 VAC or 12 VDC. 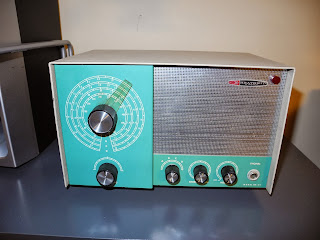 The is a three tube regenerative receiver, the only one Heathkit offered other than the EK-2 which was sold as part of a basic radio course and became a superhet receiver at the completion of the course.

A regenerative receiver is based on the idea of increasing the gain of a circuit by coupling the output of an amplifier back to it's input so that the signal passes through the stage many times, increasing the level of amplification. It originated in the early days of vacuum tubes where the gain of a single amplifier stage was not very high. If the gain is too high the circuit oscillates, so a regeneration control is provided to adjust the level of feedback. Typically feedback is performed using a small coil in the tuning circuit called a "tickler coil", with regeneration controlled by a variable capacitor or resistor.

For receiving amplitude modulated signals, the receiver is most sensitive when the regeneration level is adjusted to just below the level where it oscillates. CW (morse code) and single sideband signals can be received by increasing the regeneration until the circuit oscillates. This acts as a beat frequency oscillator that mixes with the input signal so it can be heard.

As regenerative receivers go, this is a little better than some as it has a bandspread switch, headphone jack, metal case, and a decent audio output level. Compared with higher end receivers the radio is not very sensitive or selective, suffers from hum, and is tricky to adjust. Tuning is not very accurate. However, for 20 to 30 dollars it was an affordable way for someone to get introduced to shortwave listening and the satisfaction of building a radio yourself.

This preceded and was similar to the GR-64. It is a 4-tube general coverage receiver featuring four bands. Features are what would be expected in a radio of this price range. It could optionally accept the GD-1 Q-Multiplier to improve selectivity. 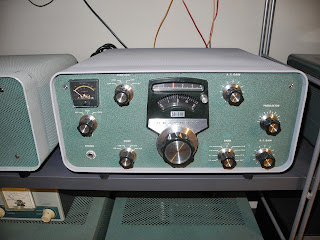 The SB series was Heathkit's high end range of amateur radio equipment. It competed with commercial equipment from Collins, and was very successful. The SB-310 was developed by modifying the SB-300 amateur radio receiver to receive shortwave bands. Like the SB-300, it is not a general coverage receiver -- it receives nine shortwave bands. Like the SB-300, it sports many high end features and is head and shoulders above the lower cost Heathkit receivers in terms of performance and ease of use. This came at a cost though, selling for the equivalent of over $1800 in today's dollars.

Just as the SB-310 was a shortwave version of the SB-300, the SB-313 is a shortwave receiver adapted from Heathkit's SB-303 amateur radio receiver. Features and appearance are very close to the SB-310, but unlike the SB-310, which uses tubes, it is full solid-state.

This is Heathkit's most expensive shortwave radio, slightly more expensive than the SB-310 when converted to in today's dollars. 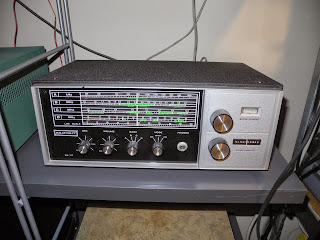 This radio can be considered a solid-state replacement to the GR-64. It has the basic features expected of a radio in this price range. This was the last Heathkit SWL receiver to sport the traditional slide rule dial. It was on the market for 12 years, some of that time as Heathkit's only shortwave radio offering.

This was the last shortwave radio Heathkit offered as a kit, being sold up until the time that they left the kit business. It is a dual conversion design and features a digital display and was in the brown colour scheme that Heathkit was using at that time.

Heathkit offered a wide range of shortwave radio kits over the years, spanning a wide range of features and prices. Many of these old radios are still in daily use listening to shortwave stations from all over the world. Additional information can be found in the references listed below and on many Internet web sites.

This comprehensive book has listings of over 770 shortwave receivers made from 1942 to 1997 including all Heathkit models.

This book covers all of the Heathkit amateur radio equipment including shortwave receivers.

This is a shameless plug for my recent book, which focuses on Heathkit's test equipment products but includes a section on the EK-2B and the accompanying course.

I own seven of the radio models listed in this article and have made YouTube videos describing each of them, as well as some videos about test equipment and radios made by Heathkit and other manufacturers.
Posted by Jeff Tranter at 7:40 PM

Very informative and well written. I have enjoyed your youtube videos also

Thanks, You wrote awesome, I have learn lots of things from your article. It's really helpful for any readers.
Battery Operated Flow Meter

Hello, I have been a ham and swl since 1959. I have an old AR 3 which I got from a an antique shop in Traverse City. I fired it up and hooked a 6 foot piece of wire as an antenna, and lo and behold I started getting many AM stations and some short wave stations around 8 MHz. I have always liked Heathkit products they represent good American ingenuity and are a Michigan company from Benton Harbor Mich