Okay, you might not get this at first. It's a TV remote control with only one button. All it can do it turn TVs off. And it works with almost every set on the market.

Have you every been in a restaurant covered with walls of television sets? Or a shopping mall or a school cafeteria? Did you find it distracting and annoying? Now do you get the idea?

I heard about the TV-B-Gone in Make Magazine and thought it was a pretty cool idea. When they came out with a kit version I decided I had to get one (I love electronic kits).

So I placed an order and shortly received a box of parts and some instructions. The full instructions are actually on the web.

I found it easy to assemble. It's a small silk-screened printed circuit board with less than 20 parts, all through-hole with no surface mount devices. The instructions are clear and you should have not have a problem putting it together correctly if you have some experience soldering. All parts are included, the single IC is socketed, and it includes a battery pack for two AA batteries. 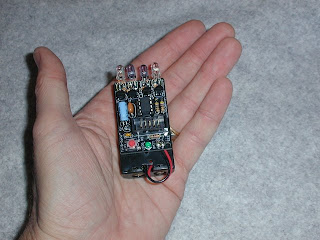 It took me about an hour to assemble, taking my time and checking my work. I had no problems and it worked the first time. I didn't test it after partial assembly as they suggest, I just went ahead and assembled it all. 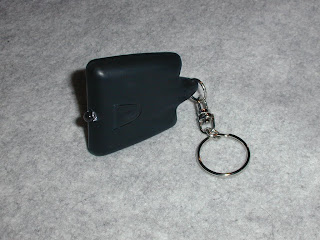 Cons:
Use it wisely or you could get in trouble like some people at CES who went overboard.

Now I must remember not to leave it in my coat pocket the next time I go on an airplane flight ("that's not a terrorist device, officer!").

Very decent review, I ordered a kit and Im waiting for it to come, how long did take you to assemble the kit?